How The Lakers Turned Their Offense Around This Season 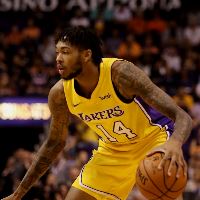 When the Los Angeles Lakers started the season, their young core was expected to compete and bring back a lot of energy that had been missing for the past several years.

Although there were glimpses of their bright future through the first 38 games of the year it became clear that things were not working well enough.

In that span they amassed the second-worst record in the NBA, they couldn’t shoot straight, and head coach Luke Walton was struggling to find the right lineups with so many similar players on the court.

However, over the last 25 games, the Lakers have gone 17-8, including the longest road winning streak they’ve had as a team since 2010.

Through the first half of the season, their top two lineups proved ineffective, amassing a negative defensive net rating. On the other hand, over the last 25 games, with Lonzo Ball out with injuries so often, they shifted Brandon Ingram to point guard.

At the same time, they also played Josh Hart and Kentavious Caldwell-Pope together in the backcourt and cut Kyle Kuzma’s time by over five and half minutes per game, which resulted in a lineup that unlocked their offense and gave them a healthy +7.6 net rating.

Even though Ball has missed a ton of games and struggled mightily early in the season, in the 20 games he’s played since December 1, he’s shooting an elite 41.2 percent from three-point range on very high volume.

The vast number of long-distance shots he’s taken and made, even though he’s been closely contested, allows us to conclude that Ball can indeed shoot and is leaving his early-season struggles behind.

And the hot shooting is not only limited to Lonzo, as in fact, the whole Laker team has improved in that regard. When comparing the shooting numbers from the first 38 games with the last 25 it’s easy to notice an unprecedented team jump as they went from dead last in three-point percentage to seventh.

This was possible in part because they increased the number of wide-open threes by over 2.5 per game and in those shots, they improved their shooting by 6.5 percentage points.

Better ball movement and spacing, along with the shift of Brandon Ingram to point guard, have all played a part in this incredible surge, as they’re able to make up for all their other issues by simply nailing more threes.

Caldwell-Pope has made the biggest impact as he increased his shooting percentage from 33.2 percent in the first 38 games to 47.4 percent (on five attempts per game) in the last 25.

Ingram playing at point guard draws defenders toward him and his length allows him to see over them and pass the ball to Caldwell-Pope when he’s wide open.

Ingram is flourishing in his new role as the primary facilitator as his assists numbers per game went up from 3.3 to 4.9 even though his time on the court is down by four minutes per game.

Ingram’s height is also a plus as he can grab the rebounds and immediately lead the fast break, something defense will always have a hard time coping with. He’s found a comfort zone as a traditional point guard on the fast break and it’s a big reason why their offense jumps when he’s on the court.

The biggest benefactor from all these shifts in minutes by Walton is Julius Randle, who has made a huge jump in production from the first half of the year. Playing six and a half more minutes per game has boosted his production by five points and two rebounds per game.

The addition of Isiah Thomas and Channing Fry (in the trade that sent Larry Nance Jr. and Jordan Clarkson to the Cleveland Cavaliers) has also helped.

Thomas has been a slight statistical upgrade, adding more assists and points over Clarkson, and Randle has successfully filled the void left by Nance Jr.

While the Lakers offense has improved considerably in the second half, their defense has been consistent all year long as they rank 11th overall in defensive rating and kept the opponent’s overall field goal percentage low.

Ingram’s long arms and mobility have been key in the Lakers defense as he uses his lateral quickness to harass opposing players into bad, contested shots.

The absence of a first-round pick in the upcoming draft will keep the Lakers from trying to tank this season and that can only benefit their young core in the long run.

The growth and development of their young core combined with the tons of cap space they will have next summer could make the Lakers a team poised to contend for a playoff spot next season.