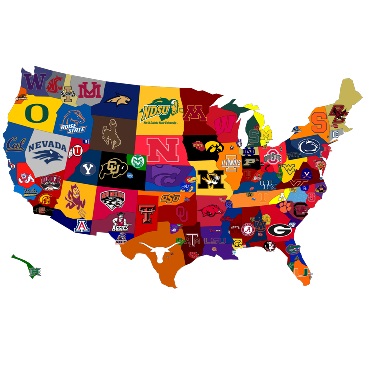 Unranked Arizona (7-4) embarrassed the mighty Ducks of Oregon (9-2) by a final score of 42-16.  The fifth ranked Ducks did not score a touchdown in the entire first half and only managed 7 points in the second. Meanwhile the Wildcats crossed the Oregon goal line in every quarter and controlled the game from start to finish.

Heisman Trophy candidate Marcus Mariota put up 308 yards and two touchdowns in the losing effort. The loss will likely put a dent in Mariota’s Heisman hopes.

Another Heisman Trophy hopeful who lost ground on Saturday was last year’s winner Johnny Manziel taking on the LSU Tigers down in Baton Rouge.  Johnny Football was not at his razzle-dazzle best against the Tigers and appeared to be a bit bewildered throughout the game.

LSU returned to what the Tigers used to be famous for pounding it out on the ground with power running and blocking complemented by an occasional downfield strike through the air and it worked like a charm.

The Bengal Tigers finished with an impressive 324 yards of offense on the ground!  Then Mettenburger threw to Jarvis Landry and Odell Beckham Jr. for an additional 193 yards in the air.

LSU Defensive Coordinator John Chavas and crew and of course, Les Miles are to be congratulated for being one of the few defenses in the country that have made any kind of impression on Johnny Football.

Manziel did finally manage to score a touchdown against LSU in the third quarter which was something that he had yet to do in his stellar career at Texas A&M.

To his great credit, Johnny Football became the smiling perfect gentleman sportsman after the game and warmly greeted Zach Mettenberger, Odell Beckham and other members of the LSU team in sincere congratulations. It was a very nice thing to see taking place down on the field after such a battle.

The Baylor Bears ranked number 3 in the BCS standings went up to Stillwater, Oklahoma as one of the very few remaining undefeated teams in the nation to take on the Cowboys of Oklahoma State University ranked number 11 in the BCS as 9 point favorites at the big Las Vegas sportsbooks.

In what was almost a surreal game on a cold windy night, Baylor, which had been averaging over 60 points per game, only managed one field goal against the Cowboys in the entire first half.  In the biggest upset of the weekend, Oklahoma State beat Baylor by a final score of 49-17.