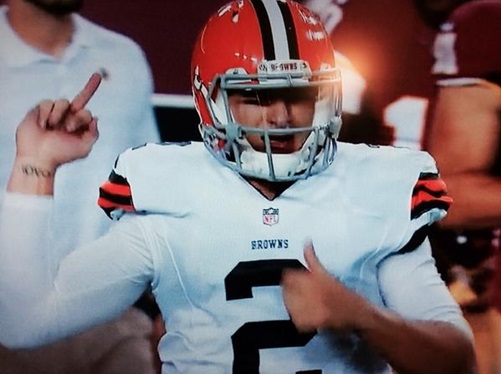 Johnny Manziel showed once again that he doesn’t care much who’s watching when it comes time to express himself.  Not that he expressed himself all that well out on the football field against the Redskins. That also probably added to his obvious frustration.

With one simple and quite common gesture, Manziel has given sports writers and commentators something to chew on for at least a week. These guys should have learned by now that when you put someone under a microscope and analyze every move that they make, they are bound to do something ‘socially unacceptable” at some point.

We all do, none of us are perfect and no one can stand that kind of scrutiny without rebelling a little now and then. But one morning we see headlines, “Johnny Football caught by ESPN cameras”. Caught?  Do they really believe that Manziel thought that no one was looking? In a football stadium, on national TV?

Of course Johnny didn’t just up and ‘shoot ‘em the bird’ just for fun.  Something happened to set him off.  Manziel is not that hot headed. Washington Redskins safety Ryan Clark shed a little light on the situation when he showed up on Mike & Mike saying “I can tell you what the statement was that set him off.”

The statement was’this isn’t college anymore and these people are faster than you are’. Of course there was a little more to it. Ryan added, “That was me cleaning up the statement but that’s pretty close to what it was”. It doesn’t take much of imagination to figure out what the missing words consisted of.

Such taunting is widely accepted throughout the NFL and Johnny Football had  better get adapted to that fact quickly and remember that those same guys he just flipped off will be seeing him again later on in the season, and they will have an open license to knock him to the ground as often as he gives them the chance.

And the trash-talking will probably only get worse. They haven’t even started in on his family and girlfriends as yet and Johnny had better be ready for that when it comes. It’s one of the oldest tricks in the NFL unwritten playbook and it ain’t going away.

Head Coach Mike Pattine said that he was ‘disappointed’ and dialing out the digit could end up costing Manziel just over eleven dimes if Goodell decides to levy a fine for unsportsmanlike conduct.