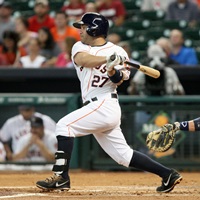 Consistency is the key to being a good batter and second baseman Jose Altuve is the best example of that. Since the 2014 season, the Houston Astros’ infielder has arguably become the best all-around batter in the majors, as he leads both leagues in several offensive categories.

The Venezuelan is the best batter since the start of that season, hitting .331. His closest competitor is Detroit’s first baseman, and fellow Venezuelan, Miguel Cabrera, who has a .316 average since 2014.

Since that year, Altuve has two batting titles and three consecutive seasons with 200 or more hits.

Altuve, who for the last week is batting .429 and has nine hits, five doubles, a homer along with two runs batted in, plans to finish the season with 201 hits, which would mark his fourth consecutive season with 200 or more hits.

Also, since 2014, Altuve has had 149 doubles, which is the best in the majors. Washington Nationals’ second baseman Daniel Murhpy is second on the list with 142 two-base hits. At the moment, Altuve has a .326 batting average and is third place in that category as he fights for his third American League batting crown.