Juventus Routs Genoa To Lead Serie A By 11 Points 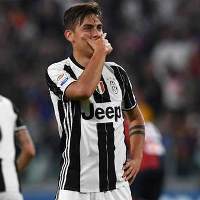 Serie A leader Juventus won 4-0 against Genoa with another goal by Argentinean Paulo Dybala on Sunday, as the ‘Bianconeri’ extended their Serie A lead to 11 points ahead of Roma, who on Monday plays against bottom-dweller Pescara.

Genoa’s Argentinean Ezequiel Muñoz scored an own goal to start the rout, Dybala double the score two minutes later, Croatian Mario Mandzukic scored the third and defender Leonardo Bonucci completed the rout with the fourth in the 64th minute.

Massimiliano Allegri‘s side dominated Genova at Juventus Stadium, and thanks to the rout is now 11 points ahead of Roma, with five games to go.

Last time these two teams met in Genoa, the hosts pulled an upset by beating the Italian powerhouse 3-1, but this Sunday the visitors were unable to stop a Juventus side that was looking fresh, confident and motivated after their victory last week against Barcelona in their Champions League Quarterfinal match.

Allegri rested several starters and played several unusual players that were hungry enough to give Juventus its 17th consecutive win at Juventus Stadium.

Muñoz opened the score in the 17th minute for the local team when he scored on his own goal when he was pressured by Claudio Marchisio and failed to clear a pass by Argentine Gonzalo Higuain.

Just two minutes later, Dybala received a head pass from Higuain, eluded a couple of defenders and passed to Sami Khedira, the German gave the ball back right away and Dybala finished the action with a beautiful shot that ended in the back of the net.

Just before the break Mandzukic, who’s playing as a winger for Allegri, scored his sixth goal in this Serie A after a run that allowed him to enter the penalty area from the left untouched. The Croatian saw his initial left-wing cross blocked, but the ball bounced back towards him and he netted the ball past Genoa’s keeper Eugenio Lamanna.

Finally, Bonucci closed the score with a magnificent long-distance goal when he shot between four defenders from just outside the penalty arc to score what was arguably the best goal of the game.