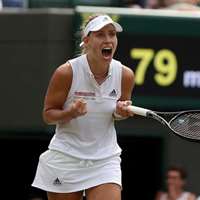 German player Angelique Kerber has cruised to Wimbledon’s semifinals after defeating Russian Daria Kasatkina in the quarterfinals in straight sets (6-3 and 7-5). She will tomorrow face 12th seed Jelena Ostapenko from Latvia, who defeated Dominika Cibulkova 7-5 and 6-4 to reach the semis.

This will be the first match ever between Ostapenko and Kerber at any level, but they both have plenty of experience at Grand Slam tournaments as Kerber has already won the Australian Open (2016) and the U.S Open (2016), while Ostapenko is a former French Open champion (2017).

In fact, for Ostapenko this is just the second time reaching a Grand Slam semifinal after she reached the semifinals of the French Open last year on the way to her Roland Garros victory.

Kerber is in the semifinals of a Grand Slam for the seventh time in her career. This is her third Wimbledon semifinal where she has a 1-1 record after losing to Poland’s Agnieszka Radwanska in 2012 and defeating Venus Williams in 2016. Unfortunately for her, Serena Williams avenged her older sister by defeating Kerber in the final in straight sets (7-5 and 6-3).

Ostapenko, the first Latvian woman to reach a Wimbledon semifinal, is the only player left in the tournament that has yet to drop a set in this tournament (10-0), while Kerber has only lost one (10-1), which came against Claire Liu in the round of 64.

Angelique Kerber is the favorite to advance to her second Wimbledon final with the oddsmakers favoring her at -170, while the return on Ostapenko is +145.

In the other semifinal, Serena Williams will face German Julia Goerges. Should both Kerber and Williams advance the German will look forward to avenging her 2016 final defeat to the younger Williams.