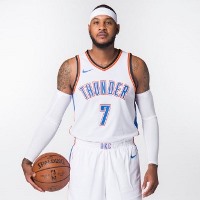 After Carmelo Anthony was traded to the Oklahoma City Thunder on Monday to create the most recent NBA “Super Team” many people are wondering how he will fit in their scheme and how the team will have to adapt to better use Melo’s talents.

Can head coach Billy Donovan manage so many egos and how does he convince his players to sacrifice for the greater good if he needs to. Will all his players achieve the team chemistry needed to succeed?

That’s what they have to aim for because that’s why Golden State is so good and that’s why they are once again the favorites to win the title. Golden State shares the basketball and not one guy overdribbles it.

If Oklahoma wants to succeed and if Melo wants to win he will have to give up part of his game because in the past he liked the offense to go through him. Same can be said of Paul George, the other big acquisition by the Thunder in the off-season. It’s inevitable that one of these three players may see a big dip in his numbers this season if they start spreading the ball around more and it will be interesting to see how they will react to that.

Defensively, but most importantly offensively, these guys have to contribute and help each other. If Donovan wants to have a chance to dethrone the Warriors his players will need to match Golden State’s desire and chemistry, they have to have each other’s back and play for one another, sharing the ball all over the floor.

Will Russell Westbrook be able to share the ball with his talented new teammates? He now has to realize he’s got help and has to behave differently from the way he interacted with Kevin Durant on the floor.

Unlike with Durant, when both players seemed to be taking turns as to whom should lead the team’s offense, Russell now has to be able to realize that he’s got to be able to distribute the ball to the open shooters that can make the easy shots in order to improve the team’s offensive flow. If he does and lets his teammates help him if they may have an opportunity to take down Golden State.

“Melo” might be willing to put up with playing at the four, defending more, sharing the ball more and even come off the bench when needed to because at this point in his career he really wants to win and have a chance to play in the NBA Finals. The question is will the other parts of the equation buy into Donovan’s plan and play along?

The success of Donovan of selling that idea and implementing it on the floor night after night will be put to the test once the season starts on October 17.