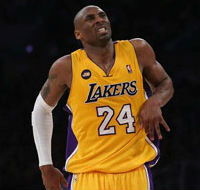 After Friday night’s game against the Golden State Warriors, Kobe told the press, “I can’t walk,” Bryant said solemnly, leaning on crutches in the Lakers’ locker room. “I tried to maybe put pressure on my heel, but there was nothing there.”

Way back on Mar 29 Kobe hurt his foot. At the time it was diagnosed as “not so rosy”. But Kobe came right back and went on a two week scoring spree that may well go down in the history of professional basketball.  I mean, he had to have broken some kind of record, right?

Just as he always has, Bryant downplayed the injury saying that it would “be all right.”  Kobe had a bone spur in his foot and that hurts like hell. How he could play basketball at that level on that foot is way beyond me.

Although he was obviously in pain, Kobe managed to score 34 points, bring down 5 rebounds and give 4 assists… plus collect 3 personal fouls.  It was a must win for the Lakers who remained a whole one half game ahead of Utah to hold on the eighth, and last, available playoff spot in the West.

Just a few days before against the Portland Trailblazers, Bryant scored 47 points, got 8 rebounds and 5 assists.  The night before that Kobe came up with 23 points in the fourth quarter to push the Lakers past New Orleans. He finished with 30 points, 6 rebounds and 6 assists against the Hornets. That’s 111 points in 3 games.

Remember, all of this came after his initial foot injury back in late March so, he was playing hurt. Bryant’s desire to take his team to the playoffs will go down as one of the great efforts in sports win or lose.

So now the word is that Kobe has suffered a complete tear in his left Achilles tendon.  Initial estimates put him out of action for at least 6-8 months. Without Bryant for the playoffs the Lakers had better come up with a plan B and quickly.

For Kobe, well, he himself put it, “the frustration is unbearable.”

Dr Neal ElAtrache told the press after the surgery to repair the tendon that he is “optimistic” about his recovery prospects. He went on to say that Bryant’s competitive drive and mental toughness will give him an edge in recovery.

Hang in the Kobe, a lot of folks are pulling for you.