Laptops On The Sidelines 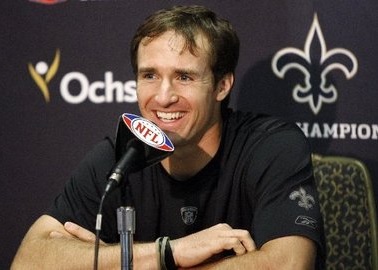 At present neither computers, laptops, tablets, smart phones nor video devices are allowed on the sidelines during an NFL game. This rule comes down from Roger Goodell and the NFL Commissioner’s office.

In spite of the obstacles, New Orleans Saint’s quarterback Drew Brees thinks that the day will come soon when these devices are allowed to aid the players and coaches. Believe it or not, Brees revealed this on a TV show called Chelsea Lately, which came as a bit of a surprise to some of his fans.

Drew would like to be able to use computer related devices so that he might review previous plays via film instead of just studying still photos stapled together like they are currently using an awkward system at best.

Brees told reporters, “Probably in the next few years you’re going to see this on the sideline, actually being used to put video on. You see us quarterbacks on the sideline flipping through pictures now. They have to print those out, staple them together.”

That Drew is also on the Microsoft payroll as an endorser of the company’s products is beside the point, his prediction does seem to ring true. Old awkward systems are replaced by newer more efficient ones. That’s just the way of the world these days and Roger Goodell will not be able to block the way for ever.

And Brees does make a good case demonstrating how quarterbacks throughout the league would benefit from the change, “You’re pulling it up, maybe you’re watching video, ‘We need to attack this guy, this is the adjustment we’re going to make’, and we’re right back on the field. The way it’s going to change the game, I think, is going to be pretty incredible.”

However, getting approval of using computers on the sidelines will not be an easy task at all. It would require a radical shift in the way the NFL looks at the game.

For the time being, coaches will continue to carry around those big plastic books with all of their secret info while the technology for having all of that information on a six by eight inch IPad has already been proven extremely useful.