LeBron James Scores 44 To Help Cavs Even Series With Celtics 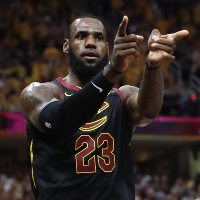 LeBron James scored 44 points and surpassed Kareem Abdul-Jabbar as the player with most field goals in postseason history to help the Cleveland Cavaliers even the Eastern Conference finals at 2-2 on Monday night with a 111-102 victory over the Boston Celtics.

The Cavs held off Boston’s comeback in the fourth quarter and squared a tight series that is now a best-of-three.

Cleveland is trying to become the 20th team to overcome a 2-0 deficit and James, who has already orchestrated two such rallies and is seeking his eighth straight finals, is a step closer to a third. To do it again the Cavs will have to win in Boston, where the Celtics are 9-0 this postseason.

Game 5 is Wednesday night at TD Garden, a place the Celtics are looking forward to going back to after giving up a 2-0 lead and falling to 1-6 on the road in these playoffs.

Tristan Thompson had 13 points and 12 rebounds for the Cavs, who won despite 19 turnovers and two assists in the second half.

Kevin Love had just nine points on 3-of-12 shooting and was in foul trouble, but he made a big 3-pointer and follow shot in the fourth quarter.

Jaylen Brown scored 25 and Boston had all five scorers in double figures, but the Celtics fell behind by 19 in the first half and didn’t have enough to catch Cleveland as Boston’s starters held their own, but none of them was able to match James in the scoreboard when it mattered most.

James moved past Abdul-Jabbar (2,356) for the most field goals in playoff history. James also recorded his 25th career postseason game with at least 40 points — his sixth in this postseason.