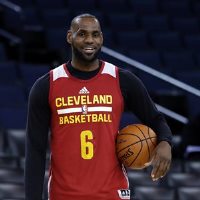 The Warriors have a star-studded roster led by two former league MVPs in Stephen Curry and Kevin Durant and a team that enters Game one of the NBA Finals on, having lost only once since March 11.

Curry and Durant will most likely be Hall of Fame members. Draymond Green and Klay Thompson could also be on their way to Springfield, Massachusetts, depending on how the rest of their careers go.

Remember, however, that James has already played against other star-studded teams in the Finals such as the San Antonio Spurs who still had Tim Duncan, Tony Parker, Manu Ginobili in their lineup and Gregg Popovich on the Bench and all of them will also one day be members of the aforementioned Hall.

The fact that James is preparing for such a formidable foe has become an old habit for him. Six of the eight times James’s teams have been the underdog in the Finals, including this year.

Instead of bothering him, he welcomes the idea of reaching the Finals once again as an underdog because he prefers to see it as a challenge and focus on the possibility of winning another championship.

In fact, the only time that a James team was favorite in the Finals it lost. It was in 2011, during his first year with the Miami Heat, when he faced the Dallas Mavericks.

For the record, James said in a press conference that he feels good about his career despite a 4-4 record in the Finals, which includes a title against Golden State.

LeBron believes that the fact that this will be his seventh consecutive trip to the NBA Finals will make people appreciate his career even more regardless of the outcome.