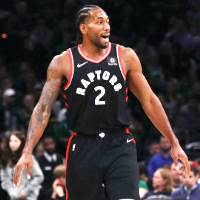 Leonard shot 16 for 22 overall, missing all three attempts from 3-point range, and went 13 for 17 at the free-throw line. He said he wasn’t aware of his scoring achievement until after the game.

It was the third 40-point game of Leonard’s career, including a 43-point effort against Memphis in Game 4 of the first round in April 2017. Leonard has scored 20 or more points in a career-best 14 straight games.

Leonard made all seven of his field-goal attempts in the third quarter and added five foul shots. His 19 points were the second most in any quarter by a Raptors player this season. Furthermore, all those points allowed the Raptors to set a franchise record with 44 points in the third quarter.

After making two 3-pointers in the first half, the Raptors connected on their first three long-range shots of the third quarter, turning a two-point halftime deficit into a 12-point edge midway through the quarter. Siakam went 3 for 3 from 3-point range in the third and scored 13 points. Toronto outscored Utah 44-32 to take a 95-85 lead into the fourth.

With this result, the Jazz has lost five of six on the road and nine of 12 meetings against Toronto. The win improved the Raptors to 5-2 on New Year’s Day, including a 4-0 mark at home.

The Raptors now travel to San Antonio to take on the Spurs on Thursday, while the Jazz will visit the Cleveland Cavaliers on Friday night.