Lonzo Ball, For Now, Looks Like A Huge Bust For The Lakers 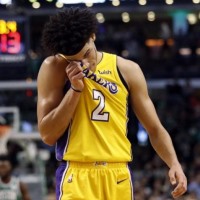 Now that the Lakers are 15 games into the season, which represents a sample size of about 18 percent, it is worth asking, is Lonzo Ball a bust?

Although the jury might be out due the fact that the season is still young, and he could take off in the coming weeks or months; it’s easy to confidently say that up to this point Lonzo has been a bust as he’s averaged a paltry nine points, 6.6 rebounds and 6.9 assists per game while shooting 30.3 percent from the floor and .23 percent from the three-point arc.

Other than the game where he became the youngest player in NBA history to record a triple-double and the game where he scored 29 points against the Phoenix Suns, he’s certainly been a bust and been a historically bad shooter so far.

Lonzo does have a nice feel for the game and has shown very good passing ability, so it would be unfair to officially label him a bust yet because his career is just getting started and he’s facing some growing pains in his first season. But all that won’t matter if he doesn’t start playing better soon. If he’s not able to improve his putrid shooting percentages, his drives to the basket and display more aggressiveness on the floor the Lakers may run out of patience soon and demote him to the bench.

If his shooting doesn’t improve the Lakers won’t care what his numbers are in the other categories, they will simply not guarantee him a place in the starting lineup.

The biggest problem is that due to these issues (which are definitely in his head a little bit) and a lack of aggressiveness, most opponents are not afraid of him and don’t even consider him a serious threat on the court.

If he can improve his shooting to a certain degree and show a little more determination driving to the basket he has the potential to be a very good player.

Most concerning for the front office is that most likely, and due to all the limitations he’s shown in his game, Lonzo won’t become the great player the Lakers were expecting him to be when they drafted him second overall in this year’s draft.

However, if these trends continue, he will definitely become one of the biggest busts in NBA history.