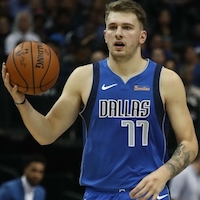 Luka Doncic has been outstanding this season and his play only seems to be getting better.

He dazzles in every game with his overall great passing, funky step-back three and his clutch shooting, and is proving to have skills rarely found in first-year NBA players.

His great performances have many pundits convinced that he will not only win the Rookie of the Year Award but that he could become a contender for the MVP award if the Dallas Mavericks can keep a high level of play all season long and reach the postseason.

The Mavericks have won seven of their last 10 games and are currently the eighth seed in the brutally deep and talented Western Conference.

The Mavs have exceeded expectations, and if they keep playing as they have right now they are very likely to join the playoff party in May.

Doncic has been the catalyst for the Mavericks this season and his play has enormously contributed to their early success.

Doncic is averaging 17.8 points, 6.7 rebounds, 4.3 assists and 1.1 steals per game as he’s become the Mavs primary playmaker running the offense smoothly and creating easy scoring opportunities for his teammates.

He’s also been very crafty in his scoring as he’s been able to make some tough shots in the paint and is shooting 37.1 percent from three.

His rebounding is already very good, and he has the potential to grab more rebounds per game if it weren’t for DeAndre Jordan. Doncic has great positioning and size to get rebounds so it’s not outlandish to think that once he hits his prime he could average around nine rebounds per game.

In his first season, Doncic has proven to be the go-to guy for his team and a key player that has made those around him better. He’s helping his team win many games and If he continues to perform at this level he will lead his team to the playoffs.

The biggest setbacks in Luka’s game are his turnovers (3.5 per game), his irregular defense, and his poor shooting from the field as he’s only shooting 42.8 percent from the field.

Doncic’s not putting up the most stellar stats in the league yet, thus he will most likely not win the award this season, but he surely deserves to be mentioned as a candidate for his value and contributions to the team.