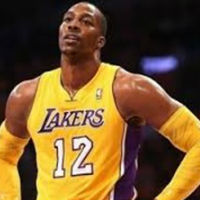 Dwight Howard was obviously very frustrated during the last game lost to the Spurs at Staples Center on Sunday evening. He had good reason to be. Half of his team, including most of the starting lineup, was sitting on the bench, dressed in street shoes, nursing some kind of incapacitating injury that kept them off the court that night. The Lakers had no real shot at taking yet another NBA championship home to Los Angeles anyway and the odds on Sunday’s game were climbing rapidly.

So the Spurs beat the Lakers and knocked them out of the playoffs. That could be seen as a good thing for the Lakers. At least it put an end to the misery that was this last season for the whole team. But now it’s not over yet. Dwight Howard sort of lost it out on the court, twice, and got himself ejected from the game. Not good.

Not that it would have made any difference anyway. Even if Howard had stayed in the game, the eventual outcome would have been the same. But……it was bad form and frankly a bit embarrassing to the team and fans there at the Staples Center who came out to see their stars shine…..not whine.

Dwight Howard’s exit from the basketball court after being thrown out of the game will not exactly endear him to Los Angeles hoops fans.

Former Laker Earvin “Magic” Johnson, who won no less than 5 NBA Championships with the Lakers, was openly critical of Howard’s behavior after the game. He took to Twitter to say:

Laker Nation: Dwight Howard that was a big No, No. Your teammates and the fans were counting on you.
LN: Dwight, I’ve been swept before but I never let my team down by getting kicked out of the game.

At least Howard was repentant later in the evening when he too took to Twitter:

I’m still upset about tonight’s game and the way this season ended. I’m mad I lost my cool. I’m sorry for letting my team and our fans down when they needed me the most. If there’s one thing I’ve learned this year it’s that I need to be more responsible for my actions.

It is an honor being a member of a team with this amazing history & the best fans in the league! I hope I get the chance to make it up to you!” Thank u la.