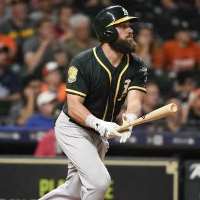 The A’s moved within 1.5 games of the AL West-leading Astros.

Osuna said he was trying to go up and in but he missed down the middle. He was most disappointed in the walk to Laureano.

Martini misplayed a fly ball by Josh Reddick and then overthrew second in the eighth inning of Monday’s 11-4 win by the Astros, but tonight he quickly got over his miscue and came up with another big hit against Houston.

Martini also hit a tying RBI double in the ninth against Houston on Aug. 17.

Houston took a 1-0 lead in the second on a groundout by Tyler White, scoring Carlos Correa.

Alex Bregman’s two-out, two-run double in the Houston fifth off Edwin Jackson made it 3-all.

For today’s series finale, the Athletics will go with right-hander Trevor Cahill (5-3, 3.44 ERA), who is 1-3 with a 6.92 ERA on the road this season. The Astros will send left-handed pitcher Dallas Keuchel (10-10, 3.54) to the mound. He will be seeking his second straight win after allowing two runs over seven innings in his last start Friday at the Angels.