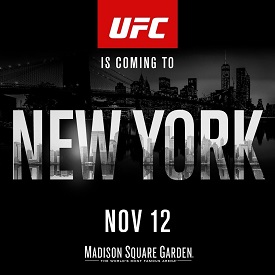 Madison Square Garden, one of the most decorated arenas in all of sports, will host UFC 205 on November 12. The event, one of the most anticipated in the history of mixed martial arts, promises plenty of action with a card full of stars.

After a two-decade ban on MMA fights ended in March the “Big Apple” is ready to host UFC 205, a mega event where three world titles will be up for grabs and will feature Conor McGregor (20-3) against Eddie Álvarez (28-4), a main event starring two champions of different weight divisions.

Featherweight champion McGregor has accepted to move up to the lightweight division to face Álvarez. If McGregor wins this fight he will become the only fighter in UFC history to hold the belt of two different UFC weight divisions at the same time. However if McGregor loses he will not lose his belt, as his lower weight division title is not at risk in this fight.

In another fight Stephen Thompson (13-1) will face champion Tyron Woodley (16-3) for the welterweight title. Woodley last fought on July 30 at UFC 201, when he knocked out Robbie Lawler to pull an upset and claim the division’s belt. This will be his first title defense.

Polish fighters Joanna Jedrzejczyk (12-0) and Carolina Kowalkiewicz (10-0) will square off to decide the champion of the strawweight division. Jedrzejczyk, who has won 58% of her fights via decision, is making her third title defense.