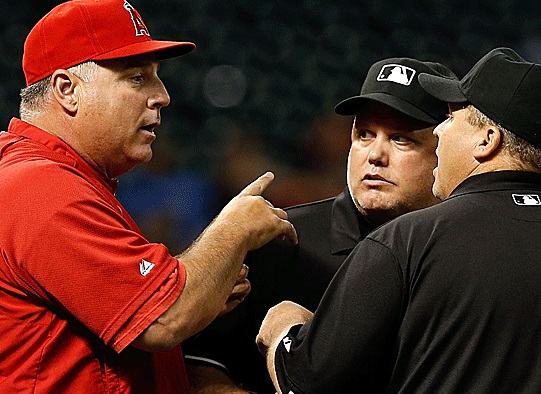 Here’s what caused all the fuss. When a MLB manager changes pitchers, the new pitcher has to face at least one batter. Most anyone who has followed or played baseball for any length of time knows rule 3.05. Incredibly, neither the team manager nor the umpires seemed to remember it that say.

When Astros manager Bo Porter brought Wright out of the bullpen, Mike Scioscia, the manager of the Angles, decided to send up a pinch hitter, as is his right.

Porter then proceeded to ask the umpires to allow him to change pitchers again. How he could have made the request makes one wonder. But then, to the utter bewilderment of Scioscia among others, the umps told Porter no problem, go ahead and make your change and have a nice day.

Scioscia came out of the dugout to point out to the umpires that the rules of Major League Baseball did not allow such a change until the incoming pitcher had faced at least one batter.  He was ignored by Umpire Fieldin Culbreth and his crew… and the change was made.

Scioscia played the remainder of the game under protest. But then the Angles came back and won the game soooo… the protest will not be heard. However, MLB did indicate that the matter “is being reviewed.”

The odd part about this incident is that the crew of umps together has about 50 years experience between them and, surely, they knew better.  The mistake seemed so obvious however, even after it was pointed out, the umps went ahead and allowed the change anyway.

After review, the MLB Commissioner’s office has suspended the head of the umpire crew Fieldin Culbreth for two games along with an undisclosed fine. The rest of the crew, Brian O’Nora, Bill Welke and Adrian Johnson received fines as well but not suspensions.

MLB doesn’t hand out a lot of suspensions to its umpires. Last year Bo Davidson got himself suspended for what they called repeated violations. What it was obviously all about was that Davidson was constantly picking quarrels with players and managers.

The incident in Cleveland the day before did not help the umps plight. The umpires there actually missed a home run even after watching the replay on the monitors.  Tell me please, how do you miss a home run?

Imagine for a moment that the real umps were on strike and these guys were the replacement umps.  What would we be reading in the press then?