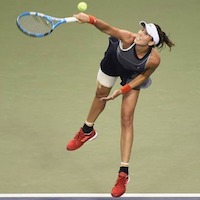 Wimbledon champion Muguruza recovered from a sluggish start to reach the last eight in Tokyo, the top seed catching fire after a trade of early breaks to rattle off the last seven games.

Muguruza broke Puig to go up 5-0 in the second set and then won with her third ace of the match. It was a booming serve down the middle that sealed the first set for the Spaniard.

Muguruza, chasing a third title of the year, roared through the second set, a murderous backhand pass giving her a 3-0 lead to effectively kill off any hopes Puig had of mounting a comeback.

The Puerto Rican, who upset Muguruza on her way to winning a shock gold medal at last year’s Rio Olympics, fell apart thereafter as the Spaniard took care of business, bringing the match to a close with an ace after an hour and 14 minutes.

Muguruza will next face either Kurumi Nara or Caroline Garcia as she takes part in the quarterfinals for the fourth straight year.

Muguruza took over at No. 1 from Czech Karolina Pliskova, who also advanced with a 6-2, 6-1 win over Magda Linette.

The second-seeded Pliskova, who had eight aces against Linette, will next face seventh-seeded Angelique Kerber. Kerber beat Daria Kasatkina 7-6 (5), 6-3.