Nadal And Djokovic Will Meet In Madrid Open Semis 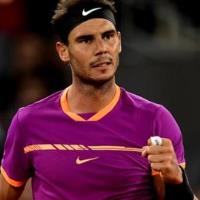 Rafael Nadal and Novak Djokovic advanced to the semifinals of the Madrid Masters 1000 on Friday, where they will face each other for the 50th time in their career, while Romanian Simona Halep will defend her crown in the final of the women’s tournament.

Nadal advanced by beating David Goffin in two hours 7-6 (7/3) and 6-2, once again eliminating the Belgian once again after doing it in the semifinalss of Monte Carlo.

Goffin managed to save up to six break points in the first set to take the affair to sudden death, where Nadal took advantage of two huge errors by the Belgian to win the set.

In the second set, Nadal saved four break points in the third game to take a 3-1 lead. A new break in the seventh game allowed the Spaniard to increase the lead to 5-2 and serve to win the set and the match.

Nadal, winner of 14 Grand Slam tournaments, remains undefeated on clay this season and on Friday will look for a place in the final after his victories in Monte Carlo and Barcelona against Djokovic.

The Uruguayan gave up the first set, before reacting in the second round, in which he did not let his rival take a single game.

Both were even in the third set after eight games, but after that Cuevas held his serve to take the lead he broke Zverev’s serve in the 10th game to win the set 6-4 and take the match.

Cuevas now will play in the semifinals against Austrian Dominic Thiem who defeated Croatian Borna Coric 6-1, 6-4 in the quarterfinals.

In the women’s side, the current tournament champion, Romania’s Simona Halep, beat Latvia’s Anastasija Sevastova 6-2, 6-3 on Friday to reach the final.

Halep, number eight in the world, prevailed in an hour and thirteen minutes to Sevastova who had already won this year in the quarterfinals of the Stuttgart tournament.

Halep, the first player to reach the tournament final three times in Madrid, will defend her title against France’s Kristina Mladenovic who defeated Russia’s Svetlana Kuznetsova 6-4, 7-6.