Nadal and Federer Will Dominate Race For Year-End #1 Spot 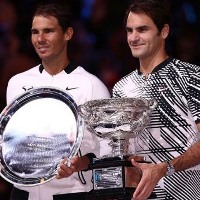 On January 1 of this year, Andy Murray led the ATP rankings with 9,110 points ahead of Rafael Nadal and 10,280 over Roger Federer. The bad results of the British player, coupled with the resurgence of the Swiss and the Spaniard, has meant that the distance has not only been reduced, but has almost disappeared.

This Monday, the ATP rankings were published with Murray first (7,750 points), Nadal second (7,465), trailing by a mere 285 points; and Federer third (6,545), just 1,205 points behind. Those numbers seem to indicate that in the upcoming months (maybe even weeks), there will be a change atop the ATP tennis rankings.

The Swiss moved up from fifth to third in the ranking because he won five of the 14 tournaments in which he participated this season, two Grand Slam (Australian Open and Wimbledon) and two 1,000 Masters tournaments (Indian Wells and Miami).

Things are so tight that during the upcoming Canadian Open Murray could lose his spot to either Nadal or Federer.

Serbian Novak Djokovic, who is in fourth place, could fall to the 15th spot after confirming that he will miss up to 12 weeks (and maybe even the whole 2017 season according to reports in the Serbian Press) due to a bone bruise in his right elbow that has been nagging him for year and a half.

This makes it safe to bett that the ATP’s top spot will have a new owner by the end of the year and that most likely Federer and Nadal will be the top two ATP tennis players by then.

The last time the Spaniard owned the ATP’s top rank and was followed by the Swiss was more than six years ago, on February 28, 2011. Nadal has not been in first place of the ranking since July 6, 2014, while Federer has not held the top spot since November 4, 2012.

So far 2017 feels a lot like 2008 all over again, with Nadal and Federer leading the world of tennis, alternating victories at the top tournaments and dominating above the rest.