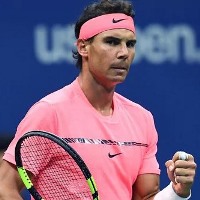 Rafael Nadal defeated Russian Andrey Rublev in three sets 6-1, 6-2 and 6-1 to advance to the semifinals of the US Open where he will face the winner of the match between Swiss Roger Federer and Juan Martin del Potro.

Although the match was expected to be a close clash between two generations of tennis, it ended up being a field trip for the Spaniard.

Nadal, who has won two US Open titles and 15 Grand Slam tournaments, beat the 19-year-old Russian in three straight sets just one hour and 36 minutes.

Federer and Del Potro play on Wednesday night, while the US Open semifinals are scheduled for Friday afternoon.

With a solid tennis of only 20 unforced errors, against 43 from Rublev, 21 winning shots Nadal proved far superior to the Russian to advance to his 26th Grand Slam semifinal.

The Spaniard, who will play his fourth US Open semifinal, played his best tennis of the tournament and now calmly waits for his next opponent as he acknowledged that either of them (between Federer or del Potro) “will be very difficult”.

Nadal broke early in the second game of the game, aided by a double fault by Rublev, who looked quite nervous throughout the match.

Nadal has a 3-2 record in US Open semi-final appearances, going on to make the final against Novak Djokovic three times, beating the Serbian in 2010 and 2013 and finishing as runner-up in 2011.

Rublev became the youngest US Open quarterfinalist since 2011 and after this stellar US Open run his ranking will rise to a career-high of No. 37.