Nadal Extends His French Monarchy with Win Over Wawrinka 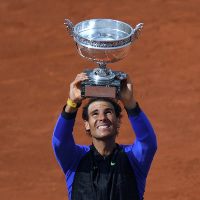 Spaniard Rafael Nadal knocked out Swiss Stan Wawrinka 6-2, 6-3 and 6-1 in the French Open to conquer his tenth Roland Garros and his 15th Grand Slam.

Playing some spectacular tennis, reminiscent of his best years, Nadal crushed Wawrinka in two hours and five minutes on the Philippe Chatrier court, a victory that will take him closer to being once again the world’s number one. For the moment, he will jump from the fourth to the second place in the ATP ranking.

At 31, Nadal surpassed Pete Sampras’ 14 Grand Slams and trails only Roger Federer who has 18. Nadal however is the only player who has won 10 times the same Grand Slam, cementing his place as the most dominating tennis player on clay ever.

The Spaniard thus crowned his resurgence in a year where he seems to have found a second youth. After reaching the finals of Australia, Acapulco and Miami in the first three months of 2017, Nadal set cruising speed as soon as the clay tournaments arrived. This year he won his tenth Monte-Carlo, his tenth Count of Godó in Barcelona and then his fifth crown in Madrid.

Although this year he shined in each match at Roland Garros, Nadal left his brightest plays for the final against Wawrinka, who seemed almost unbeatable until he started the match against Nadal.

It’s the third time that Nadal conquers the French Open without yielding a set (he did it previously in 2008 and 2010), but this time he did it by losing just 35 games, shattering his previous mark of 41 in 2008, which until now was considered his most dominating tournament in Paris.

Wawrinka, who knocked out Nadal in the 2014 Australian Open final to celebrate the first of his three Grand Slam Wins, was probably too tired from the marathon semifinal match against Andy Murray that lasted over four and a half hours.

That’s why he probably lacked any aggressiveness against Nadal from the start and that ended up costing him enormously against a player as dominating as the “King of Clay,” who despite splitting the first four games of the first set (2-2) won four in a row to claim the first set 6-2.

With the first set in his pocket after 42 minutes, Nadal made it clear to Wawrinka that he would have to raise his game to a whole new level if he wanted to stop him from winning his 10th Roland Garros trophy.

For Nadal, The Philippe Chatrier court is his sanctuary, almost his castle, where he becomes impregnable and it’s almost impossible to beat him.

When the clock on the court marked an hour, the Spaniard already had half the trophy in his hands. With a three-game lead in the second set Wawrinka seemed to have no answer for Nadal and was almost letting the Spaniard run away with the trophy.

After Nadal won an exciting point to take a 5-3 and 40-15 lead Wawrinka exploded. He slammed the racket against the floor, then broke it with his knee and hands. His frustration continued as he grabbed his new racket and started to hit his head with it.

Nadal looked at him in amazement and clenched his fist. The statistics by then showed a huge difference on the opposite sides of the net: the Spaniard had 18 winners and just 11 unforced errors, while Wawrinka had just ten winners and 24 unforced errors.

Using huge serves and masterful volleys Nadal achieved his goal of having Wawrinka running from one side of the court to the other to force him to hit back from uncomfortable positions.

The third set continued with the same script and the Spaniard broke Wawrinka’s serve three times to take the trophy with a superb 6-1 win.

Some of the almost 15,000 spectators looked incredulous as the “King” of Clay” celebrated his fourth title of the year and the 73rd of his career.

No man before Nadal had won a Grand Slam more than eight times. Only in the women’s side have we seen such a feat before, as Australian Margaret Court won 11 times in Australia between 1960 and 1973, but that was before the start of the Open Era in 1968.