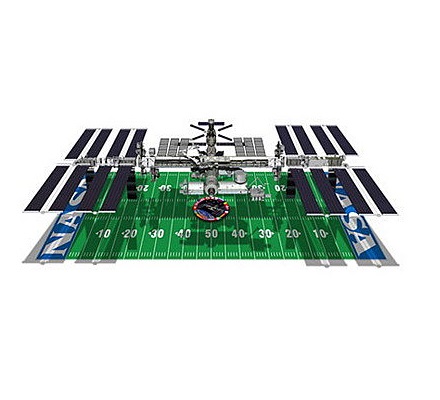 We don’t often think of the National Aeronautics & Space Administration as being associated with sports in America… but there are some very definite connections.  In fact, today’s athletes, both amateur and professional have much to be thankful for to the men and women at NASA.

They may not have been back to the moon lately but the labs at NASA have continued developing new and better materials that have applications all the way from space walks to touchdown runs.

The most obvious contribution from NASA would be in the realm of communications. The system of satellites surrounding the globe today makes it possible for the entire planet to witness almost any sporting event in real time and in amazing definition. NASA’s advances in cameras and lenses have led to High Definition TV which makes the experience of watching the big game at home better than ever before.

Helmets and headgear are getting a lot of press these days because of the current concussion issues that are finally coming to light. Some helmet manufactures are actually being sued by families of players who were injured while using their product… which was supposed to be for the protection of the player. Here is where NASA comes into the picture.

NASA scientists have spent years developing insulation materials to protect astronauts from the rigors of blast off and outer space. The demands were high and there were many failures along the way, but back in the 1960’s NASA’s engineers out in California at the Ames Research Center began working with Temper Foam, a shock absorbing form, in an effort to minimize the effects of the high G-Force stress suffered by test pilots at NASA and elsewhere in the military.

Today you can buy a mattress made out of the stuff, but it was the guys at NASA that developed the foam which eventually found its way into football helmets and hockey helmets.

And that tough material they use in the helmets themselves?  That’s not just plastic.  It’s called Lexan and that material was also developed by NASA after being invented by a German scientist in the late ‘50’s.

Ever wonder where those nifty wireless helmet communicators come from that the NFL quarterbacks often use?  You guessed it… NASA, once again.

But wait, the new International Space Station is more or less the same size as an NFL football field.  Could it be that NASA and the NFL are already planning a Super Bowl in orbit?