NFL Returning To The City Of The Angels 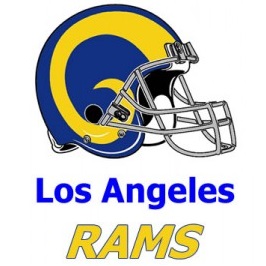 Why is there no NFL team in Los Angeles? It’s the second largest market in the United States and there’s no professional team. That does not make much sense.

The Rams used to be located in Los Angeles but somehow ended up in St. Louis.

The Los Angeles Raiders moved back up to Oakland. There were NFL teams in Los Angeles dating all the way back to 1946. But, since1996, LA has been without a pro football team.

Fingers were pointed and the blame was passed around, but still Los Angeles had no football team. Even with such a large fan base, the NFL teams in LA had trouble filling up the giant 90,000 seat Los Angeles Coliseum which resulted in their games being blacked out in the local area which did nothing at all to build the popularity of the sport in Southern California.

In fact, folks resented the blackouts to the point that they wrongly blamed the teams.  So in 2012 the Los Angeles City Council approved a plan to build a new facility, which would be named Farmer’s Field, in downtown Los Angeles as a part of the big LA Live Complex which includes the Staples Center.

This move was mostly seen as an attempt to attract another NFL team to the City of the Angeles. However, NFL Commissioner Roger Goodell has publicly stated that he would not be in favor of any of the existing teams in the league making the move to Los Angeles. Therefore, if LA is to get its NFL franchise back, the league will have to expand to 33 or 34 teams in order to do so.

Strange as it may seem, the principal competition for Los Angeles in gaining a new NFL franchise is the city of London., over in England, not even in the USA. Now the NFL has had some very successful outings over in the UK, and it cannot be denied that there is much enthusiasm for American style football there, but placing an NFL franchise overseas when the second largest city in America is left without a pro football team does not set well with many people.

But apparently Goodell is unmoved by any such patriotism. He said, “I’d love to be back in Los Angeles. But it has to be done the right way, we have to do it successfully. I want both London and LA, but it doesn’t matter which one is first.”

Perhaps it doesn’t matter to Mr. Goodell, but it sure the hell does to the fans in LA.