Noah Follows Jordan As Defensive Player Of The Year 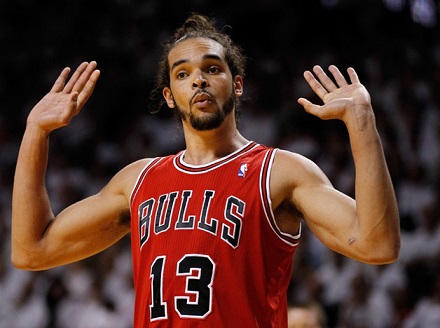 When the Chicago Bulls’ Derrick Rose went down once again to yet another injury early on in the season, most NBA fans wrote the Chicago basketball team off for the year. Everyone, that is, except the Bulls themselves, their coach Tom Thibodeau and their outstanding defensive center, Joakim Noah.

Noah was drafted by the Bulls in 2007 after winning back-to-back NCAA National Championships in 2006 & 2007 under Coach Billy Donovan with the Florida Gators. Although many fans still believe Joakim to be a foreign import, he was actually born right here in the USA in New York City to a French father, a world class tennis champion, and the former Miss Sweden, Cecilia Rodhe.

In recognition for his extraordinary efforts on the court, Noah has been named the NBA’s Outstanding Defensive Player for 2014 and the vote was not even close.  Noah received 100 or the possible 125 votes from a panel of sportswriters and broadcasters and ended up with total 555 points and veritable landslide.

Noah was lucky enough to have his Mother and Father, the famous Yannick Noah, as well as his brothers and sisters present at the awards ceremony. He told the audience there, “This is very humbling to be in this situation right now.” Then he looked over at his coach Tom Thibodeau and said, “Without your system, this wouldn’t be possible.”

Joakim Noah has now joined a very exclusive club in Bulls lore. He has become one of only two Chicago players to win the coveted Defensive Player of the Year Award.  The other was Michael Jordan way back in 1988.

It was Noah who held the team together during the rough days early on after they had lost first Rose and then traded away Luog Deng. He won this award as a defensive player but…ironically….this has been his most productive season offensively to date. He ended up with an average of 12.6 points per game with 11.3 rebounds and 5.4 assists and was generally recognized as one of the NBA’s best passing big men.

Bull’s General Manager, Gar Forman told reporters, “It’s been really fun for all of us to watch him and his game evolve and grow over the years. He’s a competitor.  He’s passionate. He’s intelligent and he’s a leader. But along with that, what Joakim probably is the best teammate that I’ve had a chance to witness in the 16 years that I’ve been with the Chicago Bulls”.