Northwestern Has A New Union 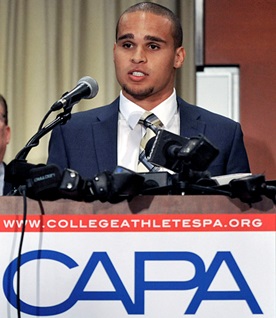 Last week’s historic vote by student athletes at the Northwestern University to unionize will have some far reaching implications for both sides of the issue. The things that the student athletes are asking for through CAPA do not sound at all unreasonable. But the backlash has been brutal.

In answer to these requests the NCAA, and many of the Universities involved have circled the wagons and seem to be preparing for an all out assault. Most especially vocal is NCAA President Mark Emmert who continues to make one inappropriate statement after another concerning the issue. One often wonders if he has even read the requests as his voracious rebuttals never seem to address the question at hand.

In fact Emmert and the NCAA offices have done everything short of labeling Kain Colter and Ramogi Huma as outright communists. What is the great fear that these men have that cause such vehement responses to what seem like reasonable questions?

Of course the answer is money. What else? Some may be fighting to not give up their traditional control over student athletes but the real issue is money. But why should it be so. NCAA athletic programs bring in much, much more money than they cost the University.

In fact, what other departments on most college campuses actually show a profit? Damned few, if any. There should be enough to at least cover the costs of the young people down on the field that everyone has tuned in to see. They bring in the money, take care of them.

The very idea that in the year 2014, a student athlete can still sustain an injury while representing his team and his University yet end up having to pay his or her own medical expenses, sometimes for years to come. But it’s still happening.

How about the guy from UConn? They had just won the National Basketball Championship and he wanted to talk about not getting enough to eat. But at least Mr. Napier got some attention from all that, and good for him. The NCAA quickly announced that Division I athletes could now eat all they wanted in the on-campus cafeterias.

But what about the kids in Div.II and Div. III schools? Do they still go hungry? This could get ugly folks.