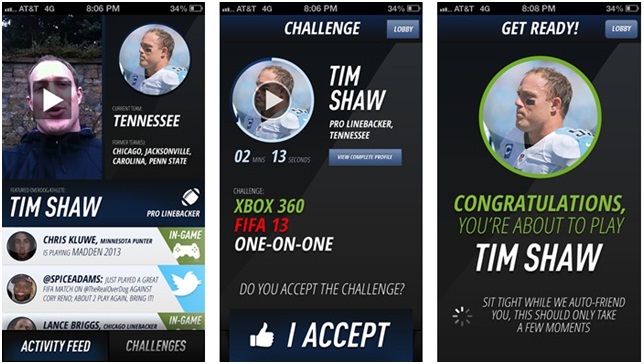 Whatever else you want to say about today’s modern world, you have to admit, the special effects department is coming right along.  Today’s technology allows fans and athletes to connect in incredibly intimate… but risk free… ways over the past few years and has created better relationships between athletes and the people who cheer for them as a result.

And now, along comes Overdog which goes a step further to putting fans right there in the game.  Those of us who have spent a little (or a lot) of time playing Madden know a little bit about what it is like going head to head with star athletes via the Internet.

Former Chicago Bear’s linebacker Hunter Hillenmeyer has developed just such a concept with his new company called Overdog which takes the dream of athlete and fan interaction that much closer to reality.

Hillenmeyer and his new company are currently in the process of generating funds form “a dedicated group of fanatics” who are interested in connecting with their favorite star athletes online. The idea is this: Players issue challenges via a mobile app, fans who subscribe are alerted to the challenge, a winning fan is chosen and he goes on to play someone famous in his favorite video game.

Fans making donations are eligible for instant gratification via a subscription to the service. For instance, investing just $15 in Overdog through Kickstarter.com qualifies you as a “beta subscriber” which means that you will have a 3 month subscription for the initial launch of Overdog.

Once the Kickstarter era closes on March 29, fans won’t be able to use Overdog until the company goes with their full public launch in August. That means that the initial subscribers will enjoy an exclusive window to play online against guys like punter Chris Kluwe of the Minnesota Vikings or even the reigning American League Cy Young Award Winner, David Price, both of whom are on the company’s advisory board.

As an additional introductory special, you can pick up five subscriptions for just $95…..such a deal.  But, for only $150 you can buy a “Forever Subscription” which locks you into the same low price, forever.

There is another Overdog option which features “a guaranteed game of Madden 13 with a player from your favorite NFL team”…… for only $1,000.

Best of luck to Mr. Hillenmeyer and Overdog!