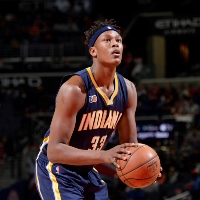 Myles Turner scored 25 points, and Thaddeus Young added 19 points and 10 rebounds to lead the surprising Indiana Pacers (40-28) to a thrilling win over the Philadelphia 76ers 101-98.

In a possible Eastern Conference playoff preview, the Pacers won their third straight and improved to a season-high 12 games over .500. despite overcame a poor performance by Victor Oladipo.

The Sixers, who were coming off a 99-97 victory at Boston on Sunday night, won despite Joel Embiid’s 29 points and 12 rebounds and the contributions of Ben Simmons, who finished with 10 points, 13 rebounds and 10 assists for the 76ers (36-30).

Simmons recorded his seventh triple-double of the season on Tuesday, tying Magic Johnson for the second-most triple-doubles by a rookie in NBA history

The loss snapped Philadelphia’s 13-game home winning streak. Indiana began the day in third in the East, two games in front of sixth-place Philadelphia. The 76ers are aiming for their first postseason berth since 2012.

The Pacers and the 76ers could meet in the first round of the playoffs and the game, which had a playoff-like atmosphere, proved the Pacers are fully capable of winning on the road.

The Pacers led throughout the second half, but they had a hard time separating themselves from Philadelphia. Oladipo, who was averaging 23.8 points coming into the night, finished with 11 points on 4-for-21 shooting, including 1 for 4 from 3-point range.

The Pacers, who have won 14 of their last 17 games in Philadelphia, lost Domantas Sabonis with just under two minutes left in the third quarter. Sabonis limped to the locker room with an ankle injury, but X-rays after the game were negative.

Pacers power forward Trevor Booker had five points and six rebounds in 17 minutes. The victory clinched the head-to-head tiebreaker for the Pacers, who have won two of three games against Philadelphia this season.