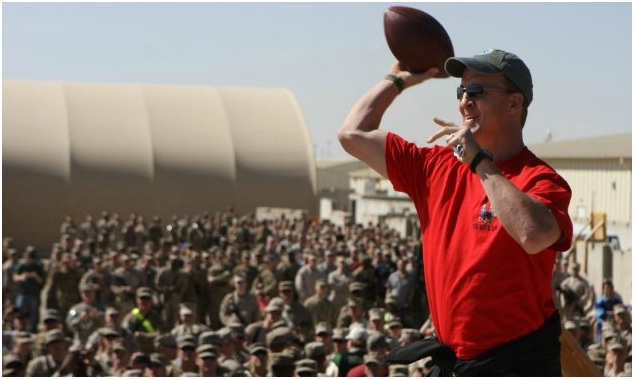 You see Peyton Manning all over the place these days.  On his way to Archie’s’ for a BBQ while hawking a brand new car or giving away millions of free pizzas. Manning’s own charity, the Peyback Foundation helps disadvantaged kids in Louisiana, Tennessee and Indiana.

Last week found Peyton over in Afghanistan with a bunch of Dallas Cowboy Cheerleaders.  What a party, you say, but no…..Peyton and the ladies from the Cowboys were there to entertain and inspire the troops aboard the USS John C. Stennis of the US 5th Fleet.  They also visited Camp Leatherneck in Afghanistan.

Along with Manning and the Cheerleaders were former MLB pitcher Curt Schilling and NFL stars Vincent Jackson and Austin Collie.  They were part of a USO tour that visited six countries on a whirlwind tour designed to boast troop morale. The group was accompanied by the Vice Chairman of the Joint Chiefs of Staff, Admiral James Winnefeld for an official touch.

Part of Manning’s show was throwing some passes to members of the audience. Lance Corporal Terrill M. Clark from Brookshire, Texas was one of his receivers who later wrote, “ I was nervous, I won’t lie”.  Clark missed on the first attempt but made a nice juggling catch on the second. “I was a little embarrassed when I dropped the ball,” said Clark, “but who can say they caught a ball from Peyton Manning?”

Obviously, Peyton was a hit with the troops, but, boys being boys, the Cowboys Cheerleaders got the biggest cheers of the day.

As a sort of finale to his presentation, Manning presented an autographed NFL football to Major General W. Lee Miller the Regional Command Southwest commander saying, “I want you to have this football to remind you guys we are thinking about you and praying for ya’ll to return safely.”

Peyton woke up on Saturday morning in Germany at the close of his stint with the USO and then flew to Kansas City to attend the NFL 101 Awards that evening where he received the AFC Offensive Player of the Year Award.  The occasion marked Manning’s seventh trip to the awards ceremony.