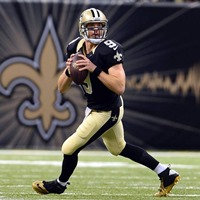 The number-six seeded Philadelphia Eagles visit the New Orleans Saints in the NFC divisional round this Sunday at the Mercedes Benz Superdome.

The defending Super Bowl champion Eagles, once again led by quarterback Nick Foles, take on the NFC’s top seed led by quarterback Drew Brees and a potent offense that should benefit from having home-field advantage throughout the playoffs.

The Eagles, of course, are more than up to the challenge as they are coming off a huge 16-15 road win against the second-seeded Chicago Bears in what was a thrilling wild-card game at Soldier Field. The Saints, however, are in a different weight class by themselves and should prove to be a much more difficult challenge than the Bears.

The Saints are not only coming off a bye week but have in fact already faced the Eagles this season at the Superdome. The game did not go well for Philadelphia at all as they were routed 48-7 back in Week 11.

This game now presents an opportunity to not only make it back to the NFC championship but to redeem themselves. After looking back on the numbers of the last game, is clear that the unit that needs to step up to avoid another poor showing is the Eagles secondary.

Although they have improved during the last five weeks, they need to show cohesiveness and elevate their game further. They must play together and find ways to make plays all over the field. The Eagles must have good communication to avoid blowing coverages and keep the Saints’ receivers from breaking free.

The Eagles secondary has been able to do that by finding ways to make timely plays on the ball and breaking up passes with tight coverages and great route running, which has also resulted in crucial interceptions. The Eagles are also playing better against the deep ball, which should be crucial against Brees and his receivers.

The fact that Brees has already picked this secondary apart proves that these players will have to perform above their level to give the defending champions a winning chance.

For the Eagles, there simply are some one-on-one battles that they can’t win. In the passing game, it all starts with Michael Thomas, but the sheer number of offensive weapons that the Saints can deploy is overwhelming.

One explosive player that the Eagles can’t sleep on is Alvin Kamara as he’s a double threat working out of the backfield. Brees can get him involved in a variety of ways to put the ball on his hands often and keep opposing defenses honest.

Also, the fact that the Saints have wide receiver Ted Ginn back will be another huge headache for the Eagles as he’s an important player that helps them stretch the field vertically with his great speed and also clears out some space for Thomas to work underneath.

Despite the improved play of the Eagles secondary and quarterback Nick Foles, it’s hard to pick against Brees in the Superdome, so expect the Saints to advance to the NFC championship game.