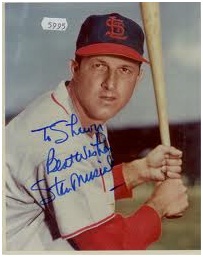 There is a statue of Stan Musial outside of Busch Stadium in St. Louis that bares the inscription “Baseball’s Perfect Knight”.   As brilliant as he was on the baseball diamond, Stan the Man was also famous for his pleasant nature and generosity off the field.

Stan Musial played Major League Baseball for 22 years.  All 22 with the same club (Check Musial Stats Here). We don’t see that happening much anymore.  Musial played for the St. Louis Cardinals and won just about every award that MLB gave out including being voted into the Baseball Hall of Fame on the first ballot…on the first day he was eligible….. by an overwhelming majority.

Musial ranks right up there with the best of the best to ever play the game.  There are several guys that you could put in the same class as Musial but there is not a single one that you can say was better than “Stan the Man”.  He made it to age 92 and died peacefully in bed with his family and friends all around.  More power to him…..a fitting exit for a genuine American hero.

In 2011 President Barack Obama personally placed the nation’s highest civilian honor – the Medal of Freedom, around the neck of Stan Musial “for his unrivaled passion for the sport and the example he set for all young Americans”.

Stan Musial played in an unequaled 20 MLB All Star Games.  During his tenure in St. Louis, the Cardinals won the World Series 3 times. He won the National League Batting Championship 7 times and was the NL MVP 3 times.  In 1957 Musial was the recipient of the coveted Lou Gehrig Award.  The Cardinals have retired Musial’s’ #6 jersey and he is still highly revered in St. Louis.

Cardinal’s owner Bill Dewitt Jr. said “We have lost the most beloved member of the Cardinals family. Stan Musial was the greatest player in Cardinals history.

“Stan will be remembered in baseball annals as one of the pillars of our game,” Hall of Fame President Jeff Idelson said.

“The mold broke with Stan. There will never be another like him.”