Raptors Improved Passing Could Catapult Them To The NBA Finals 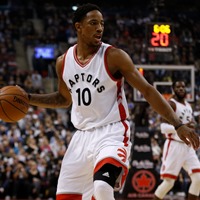 The Toronto Raptors have shown improvement year over year for several seasons and have altered their culture and talent enough to have a legitimate shot at beating the Cleveland Cavaliers and contend for the Eastern Conference title.

Under head coach Dwayne Casey the Raptors have shown consistent improvement year after year. Despite that, nobody seems to be taking them seriously and don’t even mention them when evaluating the most talented teams in each conference.

This is perhaps because despite their marked improvement there was something that kept them from being considered a serious contender. That issue was their isolation-heavy offense which usually crumbled in the playoffs and kept them from making deeper runs. Even when they faced the Cavs as the No. 1 seed in the East during the 2015-2016 season it felt like they didn’t really have a shot at beating them.

Last year they took a step back after being swept in the second round by the Cavs, something that put Casey firmly on the hot seat coming into this season.

But this season (the seventh under Casey) the Raptors are doing something that may help them break through against the best the East has to offer.

This year the Raptors are passing the ball a lot more as they have a bigger commitment to moving the ball. This change is helping them get higher quality shots and involve more players when they are in attack mode.

Last season the Raptors used isolation on 8.5 percent of the plays they ran on offense, which ranked them sixth in the league. In contrast, this season that number is down to 5.8 percent, which currently ranks them 25th in the NBA.

All this extra passing has positively impacted Kyle Lowry and DeMar DeRozan, the top two players on the Raptors.

The communication between DeRozan and Lowry on the floor has improved due to the increased ball movement. Lowry has found DeRozen a lot more this season as he’s assisted him in 18.9 percent of all his shots. Last year that number was just 8.3 percent.

DeRozan has also been setting Lowry up. Instead of trying to hit tough shots with defenders all over him DeRozan has been passing the ball to Lowry and as result creates a lot more open looks.

As a result, Lowry’s had a huge increase in catch-and-shoot attempts and has been attempting open shots on a more regular basis; while De Rozen has seen his assists per game go up a full assist.

Thus, the Raptors are taking shots that have a higher probability of going in, instead of dealing with the tough guarded shots they were consistently facing last season.

With less reliance on Lowry and DeRozan, other guys are getting more involved and developing as a result.

Transition plays have also added speed to their game. With the role players getting more involved on the fast breaks, they can save more energy to use it on the defensive end and therefore the whole team improves.

Consequently, their defense has jumped from 11 last year to sixth this year and they’re in the top five in both steals and blocks.

With the Raptors now being a team that is in the top ten in both offensive and defensive rating, it can be considered a title contender as they now have the talent and personnel to compete with Cleveland.

All these added passes have the Raptors on pace to have the highest win total ever in franchise history and thinking about perhaps this year breaking through all the way to reach the NBA Finals.

Before that happens, Casey of course must solve the issue of who on the Raptors can guard LeBron.