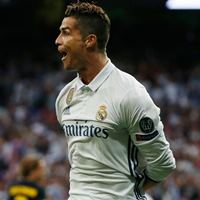 Real Madrid defeated Atletico Madrid 3-0 at Santiago Bernabeu Stadium in the first leg of the UEFA Champions League semifinal. With this dominating victory, the “blancos” take a commanding step towards reaching their second consecutive final of the most important soccer tournament in Europe.

From the start, the locals came out decided to leave behind recent struggles against Atletico Madrid and with a Cristiano Ronaldo on fire they did just that. Ronaldo did not miss most of the scoring opportunities he had in front of Atletico’s keeper Jan Oblak.

Cristiano Ronaldo opened the scoring with a header in the 10th minute off a center from Casemiro, then in the second half he shot from inside the area in the 74th minute to score the second and 12 minutes later he finished a counterattack with a shot near the penalty spot to complete the hat-trick and make it 3-0.

Real Madrid always seemed to have control of a match in which Atletico, after starting the first 15 minutes aggressively, ended up falling back and trying to use the counterattack to surprise Real Madrid.

Real Madrid’s opening goal encouraged the locals who took control of the game against an opponent that rarely managed to threaten Real Madrid’s keeper Keylor Navas in the first half.

In one of those rare occasions Navas won the one-on-one battle against Atletico’s striker Kevin Gameiro and took the ball from his feet as he entered the penalty area.

Atletico would have to wait until the second half to get more offensive opportunities, but the “colchoneros,” who only had one shot on goal in the entire game, failed to create any real threats against Navas despite getting more ball possession and playing  in Real Madrid’s own half.

Close to the end of the game Cristiano dashed Atletico’s hopes when he took control of a pass from Lucas Vázquez to shoot near the penalty spot to seal the commanding 3-0.

The second leg will take place next Wednesday at Atletico’s Vicente Calderon Stadium. Tomorrow, in the other semifinal’s first leg, Juventus visits Monaco.