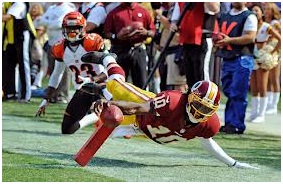 About the only person not being critical of Red Skins Head Coach Mike Shanahan is Robert Griffin III……and the whole uproar is about him.  Griffin is a strong willed young man.  As it turns out, Shanahan let RGIII go back into the game after he was hurt on Dec. 9 against the Ravens, but, he did not send the rookie quarterback back into the game.  Griffin himself went back onto the field after sitting out one play without even consulting the coach or the doctor.

A lot of writers and fans believe that Coach Shanahan was in error to leave his star rookie in the playoff game against the Seattle Seahawks last Sunday.  Not only did the nation have to watch RGIII limping around in obvious pain, the Red Skins were getting beat and Shanahan had a perfectly good backup quarterback in Kirk Cousins, another gifted rookie, who had previously proven himself capable of handling the job.  Some surmise that the coach blew the game by leaving Griffin in.

RGIII himself defended his coach via Twitter on Monday posting:

Many may question, criticize & think they have all the right answers.

But few have been in the line of fire in battle.

Shanahan said that he talked to doctors three to four times during the game, adding, “I thought we made the right decisions.”

While it is true that none of us was down on the field during the crisis, it was abundantly clear that, after the scoring two touchdowns in the first quarter, Griffin was just not getting the job done on the field.

He only managed to pass for 16 whole yards during the rest of the game.

Orthopedist James Andrews told USA Today Sports before the game on Sunday that he was “scared to death” over Griffin playing with an injured knee and a brace.  Why didn’t he stop him from taking the field in that case?

Since when does a 22 year old rookie football player dictate to the coach and the team doctor when he will go back into the game after an injury?  Excuse me, but is that his decision?  All else aside, consider the investment that the Red Skins organization has put into RGIII as their new franchise quarterback.

Robert Griffin III is a strong person as well as being a gifted athlete, it would be a crying shame to waste him in his first year in the NFL.