Rick Pitino Elected To The Naismith Hall Of Fame 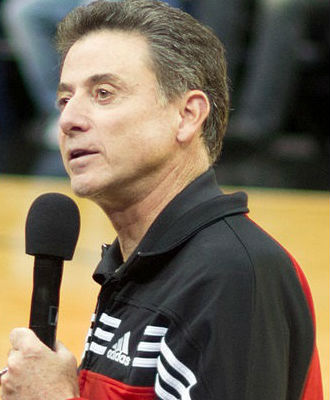 Louisville’s Head Basketball Coach Rick Pitino had one hell of a week. Not only has his team, the Cardinals, made it past some pretty stiff competition to reach the championship game… the culmination of March Madness, then, he was elected to the Naismith Memorial Basketball Hall of Fame.

But wait, that’s not all folks. His son, Richard, was just hired at the University of Minnesota and, on top of that one, his horse, Goldencents, won the $750,000 Santa Anita Derby and qualified for the upcoming Kentucky Derby.  What a week!

“You talk about a lucky couple of days for me,” Pitino said.

“It’s been a roller-coaster ride,” Richard Pitino said. “We were really struggling as a family, but this week had been unbelievable for us as a family. If we win tomorrow, I’m going to Las Vegas or I’m going to play the lottery.”

This is Pitino’s sixth trip to the Final Four… with three different schools.  There was the Cinderella run with Providence back in 1987. Then three times while he was coaching at Kentucky and now twice with Louisville. In 1996 he won the NCAA Championship with the Wildcats.  If Louisville wins it all this year, as the oddsmakers are saying they will, then Pitino will become the very first coach in the history of the NCAA to win a championship with two different Universities.

Coach Pitino also dabbled in the NBA with some success.  From 1987-1989 he coached the New York Knicks before his turn at Kentucky from 1989-1997.  In ’97 he went back to the pros to coach the Boston Celtics until 2001 when he was lured back to the college ranks with Louisville.

Coach Pitino is now 60 years old and it was widely rumored over the summer that he would be retiring to his home in Miami to kick back and enjoy life with this family and friends.  His long term rivalry with present Kentucky head coach John Calipari, has received much press over the years.  For a long time it seemed that Calipari was winning… until this year rolled around.  2013 was all Pitino and Louisville.  So far, coach Pitino has posted a record in college basketball of 662 wins against only 239 losses.

Rick Pitino is generally considered one of the first basketball coaches to really take advantage of the three point shot for his offense after it was first adapted by the NCAA in 1987. He has been on the cutting edge of college basketball ever since.