Odds Are That The Saint’s Sean Payton Will Return 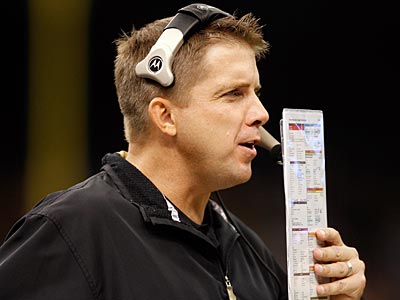 “I absolutely expect Sean to be our coach next year and going forward. These contract issues will be resolved,” These were the words of New Orleans Saints General Manager Mickey Loomis.

In the aftermath of the annulment of the sanctions against Saints players Will Smith and Jonathan Vilma, speculation abounds over the possible return of suspended Head Coach Sean Payton to New Orleans…..perhaps even before the Super Bowl.

NFL Commissioner Roger Goodell is looking around for a way to regain a little face after ex commissioner Paul Tagliabue overturned the suspensions issued by him against Saints players in November.  While not critical of Goodell, Tagliabue found that the whole affair was in such a mess that it would be impossible to pursue without stirring up even more scandal than already existed.

The commissioner’s office communicated recently with Payton about his eventual reinstatement and Goodell did not eliminate the possibility of Coach Payton rejoining the franchise before the Super Bowl.  Sources close to Payton confirm that he would like an adjustment on this suspension so that it would end at the conclusion of the regular season instead of after the Super Bowl.

Meanwhile, Payton has been having fun and spending some quality time with his 12 year old son and his football team by helping out with some of the coaching duties and “hauling Gatorade” and  “doing some things like that that really get me excited and I know get him excited.”  He also took advantage of his free time to play in the Zurich Classic Pro-Am Golf Tournament.

There was a brief rumor that Payton might be going to the Cowboys, but everybody knows that the food is much better in New Orleans.

“Free Payton” T-shirts started appearing around the Super Dome and even showing up on National TV and as Payton surely knows, the food is much better in New Orleans. “It’s humbling. It’s overwhelming,” Payton said. “We’ve got the greatest fans in sport. … There’s that bond that’s been uniquely formed. It certainly started long before we ever arrived, but it’s gotten stronger since Katrina and the Super Bowl and so there’s a close relationship.”

The biggest give away, however, is to be seen in recent interviews with Saints Quarterback Drew Brees.  When he is asked about Sean Payton’s return to New Orleans, just watch Drew’s face.  He will be back.