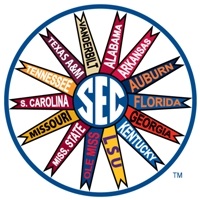 Being a member of college football’s Southeastern Conference (SEC) is a great source of pride to the member schools, their coaches, fans and athletes. Considerable bragging rights come with membership in the SEC.  Seven national championship titles in a row can not be denied. But, there is a little drawback.

To be a member of the SEC you have to play football against the other members of the SEC… oh my.

Ask any team in the country if they would like a schedule filled to the brim with tough, speedy and determined SEC teams.  Not many teams would accept the challenge. Even fewer would have a chance of coming out with a winning season if they did. Just look at the record. Several of the SEC football teams have not lost a non-conference game in years.

For the first 54 years of its existence, SEC schools were required to play only six conference games each year in order to compete for the league championship. That was the standard set back in 1933 when the SEC was formed. Then in 1988 the commissioner’s office bumped the schedule up to 7 conference games per season. There was a unanimous outcry from coaches throughout the south.

In 1992 the SEC was expanded once again to now include 12 teams in two divisions and, once again, the number of conference games was expanded to 8. Once again the coaches screamed in protest. Some coaches even going so far as to say that if the 8 game requirement stood, the SEC would never again win a national championship.  Well, it didn’t exactly work out that way, but…

Since 1992, there have been 21 NCAA National Championship titles awarded, the SEC has taken home 11 of them back to the Southland.

Last week SEC Commissioner Mike Slive announced the formation of a contract between the conference and ESPN to create a new SEC Network to broadcast many more of the sporting events at member schools to the insatiable fans of the Southeastern Conference.  This is a major move and will mean a huge financial windfall to the universities involved. The deal will run for an unprecedented 20years and will provide 24/7 broadcast coverage.

So, the money is coming SEC schools will soon be among the wealthiest in the nation. Of course, they are going to have to work for it and the new nine conference games per season proposal is just the first down payment.