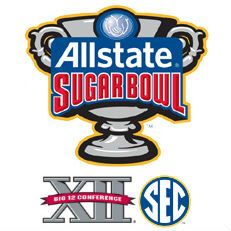 The Big 12 and Southeastern Conference have agreed to a 12 year deal with ESPN for the rights to the Sugar Bowl in New Orleans.  The contract is said to be worth about $80 million per year and will help set the stage for the long awaited college football playoff series which is still in the planning stages for 2014.

The champions of each conference will play in the game, unless those teams are selected for the four-team national championship playoff games.

The Sugar Bowl won out over Dallas, Houston and Atlanta to host the annual competition.  Another deal is being worked on that will send a team from either an SEC team, a Big Ten team, or Notre Dame to the Orange Bowl to face the ACC in years the Miami based bowl does not host a national title game.

For nearly a century now the Rose Bowl out in Pasadena California has been a solid standby on New Year’s Day each year.  With the nationally televised parade taking place before the game and all of the ceremony involved, the Rose Bowl is an American classic and a standard part of our sports culture.  The Rose Bowl is the only bowl game that has a set structure to determine just who will play in the “granddaddy of all bowl games”.  The winner of the Big Ten will face the winner of the Pac-12. This is good.  It is something that the sports fan can depend on each year.  The Sugar Bowl in New Orleans used to feature the SEC champ but for the past six years running, the SEC champ has gone on to the national championship game and by passed the Sugar Bowl.  The game played on January 3, 2012 wound up being played between Michigan and Virginia Tech.

SEC Commissioner Mike Slive made the announcement of the agreement between two of the most successful BCS conferences. “A new January bowl tradition is born,” Slive said in a statement. “This new game will provide a great matchup between the two most successful conferences in the BCS era and will complement the exciting postseason atmosphere created by the new four-team model.”

Kansas Jayhawks coach Charlie Weis agreed. “What a great day for the Big 12,” he said,”To be matched with the champion of the SEC places the two most successful conferences in the BCS era head-to-head. All Big 12 fans should be happy today.”