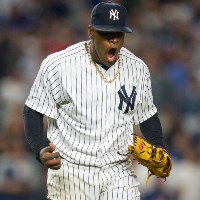 Luis Severino pitched a five-hitter with 10 strikeouts for his first career complete game and Giancarlo Stanton homered twice to lead the visiting New York Yankees to a victory over the World Series champion Houston Astros 4-0 for the second consecutive night.

Stanton, who drove in four runs, hit a two-run homer to right field that just made it over the wall in the first inning. He added a solo homer to left off Yankees nemesis Dallas Keuchel (1-5) in the fourth and tacked on an RBI double in the eighth.

The first home run by Stanton was the first Keuchel had ever allowed to the Yankees, who have won 11 of their last 12 games.

Severino was still throwing 99 mph in the ninth as he polished off New York’s third complete game over the last three seasons. The 24-year-old righty became the youngest Yankees pitcher to toss a shutout since Sterling Hitchcock, who was also 24, in 1995.

New York has taken two of three in a four-game series, the first matchup between the teams since Houston won Game 7 of last year’s AL Championship Series. The Yankees have thrown consecutive shutouts for the first time since May 2014 against the New York Mets.

The last time Houston got blanked two games in a row was early July 2013, by Tampa Bay.

Severino retired 14 of his first 15 batters, with the lone hit being Alex Bregman’s single through the right side in the second.

Keuchel allowed three runs and six hits with five strikeouts in seven innings. The left-hander pitched better after giving up six runs over seven innings in his last outing, but home runs continue to hurt him.

He’s served up eight in seven starts this year and at least one in each of his last four outings.