Sharapova and del Potro Crash Out Of China Open 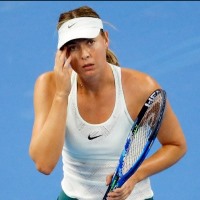 The elimination of Russian Maria Sharapova at the hands of second seed Romanian Simona Halep and the defeat of Argentine Juan Martín del Potro against Bulgarian Grigor Dimitrov, who will play in the quarterfinals against Spanish Roberto Bautista, marked an intense day of action at the China Open.

The Argentine lost in the most decisive moments despite taking the lead on the scoreboard in the two sets played. The South American ended up losing 7-6 and 7-5, against Dimitrov, who used an aggressive game to rattle ‘Delpo’. The Bulgarian player will have an interesting duel in quarters against Bautista, who had a simpler match than expected as Briton Aljaz Bedene had to abandon when the score was 6-0 and 4-0, due to physical problems in his right knee.

Other players who advanced to the quarterfinals were Australian Nick Kyrgios, who defeated Germany’s Mischa Zverev 3-6, 6-2 and 6-2, and Belgium’s Steve Darcis, who defeated Spaniard Pablo Carreño in the first round and beat Serbian Dusan Laiovic 6-3 and 6-4 in the round of 16.

In the women’s side, Sharapova lost 6-2 6-2 to Halep, as the Romanian is the first one to advance to quarters and continues to close on the number one spot in the world after Spain’s Garbiñe Muguruza retired in the first round of this tournament due to illness.

Ukrainian Elina Svitolina, who is also a candidate to take over the number one world spot, won in the second round against Australian Ashleigh Barty by a score of 6-4 and 6-2.

In other games, Latvian Jelena Ostapenko overpowered Australian Samantha Stosur to defeat her 6-3 and 7-5 with an aggressive game that also took advantage of the plethora of errors from the Australian to earn the straight-set victory.