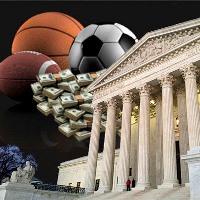 From New York to California, legislators in at least 20 states are staking that sports gambling could become legal by summer and are already creating legislation to make that happen within their borders.

It all stems from a pending case before the Supreme Court — Christie v. NCAA — under which New Jersey, through a suit filed by then-Gov. Chris Christie is seeking to strike down a federal law that prevents the state from allowing gambling on sports.

The justices are expected to decide the case by late June, but some states aren’t waiting that long to set up the legislative framework needed just in case SCOTUS rules in favor of New Jersey and effectively legalizes sports gambling nationwide.

This is a list of some of the moves that are already being made ahead of the groundbreaking decision:

–Pennsylvania and Connecticut enacted sports betting laws late last year and are poised to get into that market if the Supreme Court allows it.

-In Indiana, state legislators largely followed the Nevada model. Their legislation would allow the dozen or so state-run casinos to expand into sports betting on-site, along with mobile apps. The bill would authorize sports wagering at casinos, racetracks, riverboats, “racinos” and satellite facilities, like state-sanctioned Off-track Betting operations.

–West Virginia, the home of a handful of casinos, had a similar bill stall last year, but backers see a renewed energy this year because of the Supreme Court’s upcoming decision.

-States where lotteries or casinos or racing is legal, like Ohio and Kentucky, have proposed extending the authority of the existing commissions that oversee those activities to include sports betting.

-In New York, the state’s Senate’s Racing, Gaming and Wagering Committee held a hearing designed to help build the proper statutory framework for such a law. Furthermore, in 2013 New York voters approved in a referendum a state constitutional amendment that could expand gambling at new commercial casinos to include sports betting, if it were to become legal.

-Many states also have Native American casinos, which could be allowed to handle sports betting if the Supreme Court approves it. Indian casinos operate independently of state regulations, but generally under compacts with states that would have to be amended to accommodate sports wagering.