Tales From The Tailgate 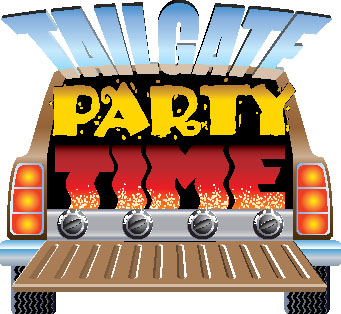 a tailgate party that is a social event held on and around the open tailgate of a vehicle. Tailgating often involves consuming alcoholic beverages and grilling food. Tailgate parties usually occur in the parking lots at stadiums and arenas, before and occasionally after games and concerts. People attending such a party are said to be tailgating. Many people participate even if their vehicles do not have tailgates.

Tailgate parties have spread to the pregame festivities at sporting events besides football, such as basketball, hockey, soccer, and baseball, and also occur at non-sporting events such as weddings and barbecues.

For several years the services of professional tailgate caterers have been available to well heeled fans who want a small feast with all the trimmings in the parking lot but do not want to do the prep and work involved.  Everything from Bar-B-Que to Jambalaya, from Grilled Fish to Cajun Gumbo can be on the menu.

As a matter of fact, several thousand fans often show up at big time football game parking lots who do not even have tickets to the game.  Many of the games are sold out way in advance but that does not stop the folks in the campers with the traveling BBQ pit from attending the festivities.  The just want to be part of the action and be able to say, “I was there”. And now Crystal Hot Sauce which, as many people in and around South Louisiana will tell you, is the best hot sauce in the world, is sponsoring a great giveaway to celebrate the fine art of tailgating.

The add goes: How would you like to win the tailgate party of a lifetime?  Crystal Hot Sauce, the official hot sauce of the LSU Tigers, is offering fans to do just that. The tailgate will be an all-inclusive party, including food and beverages.

Since 1923, when the first cayenne peppers were ground, aged and bottled as Crystal Hot Sauce, the Baumer family has been synonymous with quality and service. Members of the family are still personally inspecting the pepper fields prior to harvest to make sure each cayenne is hand-picked at its sun ripened best.

No respectable tailgating party would be complete without at least one bottle of Crystal.  Every year over 3.2 million gallons of Crystal Hot Sauce are produced and sold in and around Louisiana and all over the world.