The Bears Go To Canada For New Coach 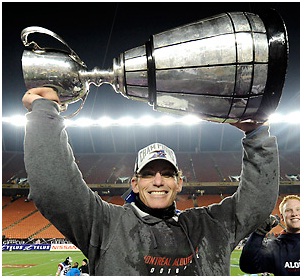 It has been almost nine year since Marc Trestman has coached in the NFL when he spent a year down in Miami with the Dolphins.  Then he made the move up to the frozen northlands and has coached the Montreal Alouettes for the past 5 seasons.  This was not the first time in history that the NFL has acquired a coach from the Alouettes…….in fact, there have been several.

CFL bloggers tell us that Trestman has helped the Alouettes “take a jump from a good team to a great one”.  The Alouettes won the CFL Super Bowl, called the Grey Cup in Canada, in both 2009 & 2010.

So, Trestman is now the new head coach of the Chicago Bears…….I guess he must like cold & windy weather.  The decision to hire him seems to be based on the idea that Trestman can fix the quarterback situation and put the Bears offense back on track.  Unfortunately, the quarterback situation means dealing with Jay Cutler…..and, unless Trestman is a psycho analyst or a hypnotist, he is going to have the same hard time that everyone else has with Jay Cutler.

Jay Cutler is a coach killer if there ever was one. Best of luck there, Coach Marc.

Why in the world the Bears management didn’t get rid of Cutler and keep Lovie Smith is a question that is being asked all around the windy city these days…..but, here we are; Marc Trestman is the Bears new head coach and Lovie will sit it out for a year before considering another NFL coaching position.

Coach Trestman has already taken one strong immediate step to solidify his coaching staff with the addition of former New Orleans Saints offensive line coach Aaron Kromer as his offensive coordinator.  The widely respected Kromer was acting head coach of the Saints for six games during the bountygate mess.

As one member of the Alouettes team told the press about Trestman,

NFL Hall of Fame Quarterback Steve Young worked with Trestman back in the 1990’s and called him “a brilliant offensive mind”.  That is quite an endorsement.