THE BRITISH OPEN & THE CLARET JUG 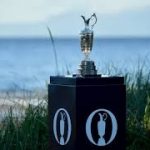 THE BRITISH OPEN & THE CLARET JUG

This year’s British Open, aka ‘The Open’ will be a special event in many ways. The Open is the only one of the four ‘majors’ on the professional golfers tour played outside the USA and this will be only the second time that the British Open has been played outside of England or Scotland.  The first was right here at the Royal Portrush, way back in 1951.

The coveted Claret Jug, which has been The Open tournament trophy since 1872, is currently in possession of last years winner Francisco Molinari and has been passed from champion to champion since Walter Hagen first won the current Jug back in 1928.  The Claret Jug is inscribed each year with the champions’ name and is considered one of the greatest honors in the sport of professional golf.

Now the Royal Portrush is not exactly Augusta National.  We won’t be seeing many flowers or majestic trees on the northern coast of Northern Ireland. In fact, on first glance, it’s a pretty desolate looking place to play golf.  But the 36 hole Dunluce Links, on which The Open will be played, is considered to be one of the top golf courses in the world and has been around since 1888.

The field contesting for the Claret Jug this year is full of talent and tightly bunched at the top.  Currently there are about 10-12 well known golfers who could conceivably bring home the Jug and the winners’ share of the nice $10,750,000 purse being offered at this years’ Open Championship.

All the big names will be there, starting, of course, with Tiger Woods who has not participated in tournament play since this disappointing performance at the US Open this year which did, however, end in a strong performance on Sunday to give Tiger Fans a boost and send wagering prices on the Big Cat moving once again. Woods has already won the Claret Jug three times.

Rory McIlroy won the British Open in 2014 in perhaps his best victory on the links so far.  He has since been one of the more consistent top golfers on the tour, and, of course, he is the local hero being from Northern Ireland himself. McIlroy will surely be the favorite among the large gallery expected to show up for the event as this on Rory’s home course. He will tee off as the wagering favorite as well, somewhere around 8-1.

Brooks Koepka is one of the new breed of golfers out on the links who takes advantage of all the modern technical aids available to the modern golfer which analyze and breakdown each and each and every move a golfer makes and lets them know how to make it better.  If the technology is there, why not use it.  Koepka is also one of the most physically fit golfers playing today.  Just look at him to see that.  He moves like a champ and is currently listed at 10-1 along with his friend Dustin Johnson who has yet to post a win on the ‘other side of the pond’.

Young Spanish golfer Jon Rahm follows at 16-1 with Tiger Woods at 18-1 and last years’ champion Francesco Molinari at 20-1 along with Xander Schauffele and Justin Rose.

However, listed at even longer odds, there lurks a considerable field of golfing talent which will also be vying to win the 2019 British Open and take home the Claret Jug….and a whole pile of money.