The Greatest Clutch Players Of All Time 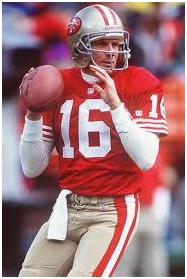 Thinking back on some of your top ten moments in sports, it’s almost always the seemingly impossible, come from behind victory that was the thing that brought us to our feet, fists clinched, barely breathing while the hero pulled out yet another win against all odds.  Yea, those were the standout moments in sports for many of us.

It’s called “coming through in the clutch” and, believe me, it is one of the things about a player the NFL, MLB & NBA scouts all take into consideration.  Being a “clutch player” can make you a lot of money……but it is hardly an easy gig.

Patriots Quarterback Tom Brady has established himself as one of the very top “clutch players” in the game today.  Time after time we have watched Brady stage a fourth quarter comeback to win the game often after some of his “fans” had already started to leave the stadium.  Little did they know!

When Brady was young, he idolized 49ers Quarterback Joe Montana….and what’s there not to idolize about the Hall of Famer who was one of the greatest to ever play the game.  Remember any clutch games involving Joe Montana?  It seemed like every week he was pulling San Francisco out of the fire and almost single handily taking charge of the game.

In fact Montana had 16 post season wins during his career and now his former admirer, Tom Brady has 17, with his win over the Texans last Sunday to advance to the AFC playoffs against Baltimore on Sunday.

In the category of clutch, nobody ever did it better than Michael Jordan but Joe Montana is right up there with him.  Montana’s motto: ABC – Always Be Clutching”.  Remember his 92 yard touchdown drive to win Super Bowl XXIII in the closing minutes of the game.  One of the great moments in sports. No one ever did it better than Montana although Johnny Unitas came very close.

Eli Manning is another “Mr. Clutch,” pulling off not one but two come from behind Super Bowl victories……one in a driving snow storm!   Unforgettable….and remember, both games were played against Tom Brady and Bill Belichick!

The late, great Otto Graham, who led the Cleveland Browns to 10 consecutive title games back in the ‘50’s, continues to define what “clutch” is all about.