The Legend Of Vin Scully 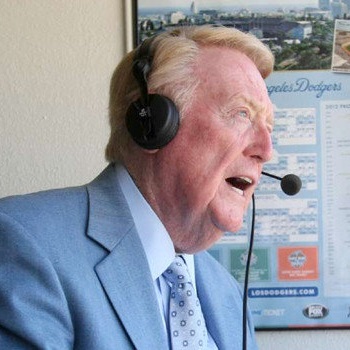 There is not a baseball fan on the face of the planet that has not heard the voice of Vin Scully. When we hear him even from another room, we know that there is a baseball game going on. Vin Scully is the voice of baseball and he’s still going!

Although Mr. Scully is now 85 years old, he has just agreed to be the voice of the Dodgers yet again this year. I mean, what other voice do they have? Vin Scully has been calling Dodger games since they were in Brooklyn back in the old days. It is probably hard for some of us to realize that we have been listening to the same radio announcer for our entire lives and some of us are getting pretty old.

Vin Scully has been called the finest broadcaster in the history of baseball. Does anyone out there want to contest that?  Probably not.  The man just sounds like baseball just hear his voice and you know there is a game in progress.

At 85, Scully takes it year to year now. Even if the veteran broadcaster had been considering retiring, the mid-season rejuvenation of the Dodgers organization and their subsequent climb to the top of the National League West standings would probably have brought him back to the announcer’s booth to be with his team on their upcoming run at the World Series, a run for which the Dodgers are now being posted as favorites in more than one major sportsbook.

Mr. Scully told reporters, “It has been such an exciting, enjoyable, wonderful season. The big crowds in the ballpark, everybody is talking about the ballclub, and I really respect, admire and love the management so, everything just fell into place. I really still enjoy it immensely. My health is good, thank God sooo… why not?”

Gas was selling for 27 cents a gallon when Vin Scully first started calling Dodger games in Brooklyn.  He was the youngest sportscaster to ever call a World Series game at the age of 25. If the Dodgers do really make it to the Fall Classic this year, it will be the first time since 1988 for Scully and the long suffering Dodger fans to have something to cheer about in the post season.

If the Dodgers do really make it to the World Series, Vin Scully will be calling the game on the radio.  Some fans might just forego the TV experience in this case just to listen to Scully with his colorful commentary that we have all grown so accustomed to over the years.