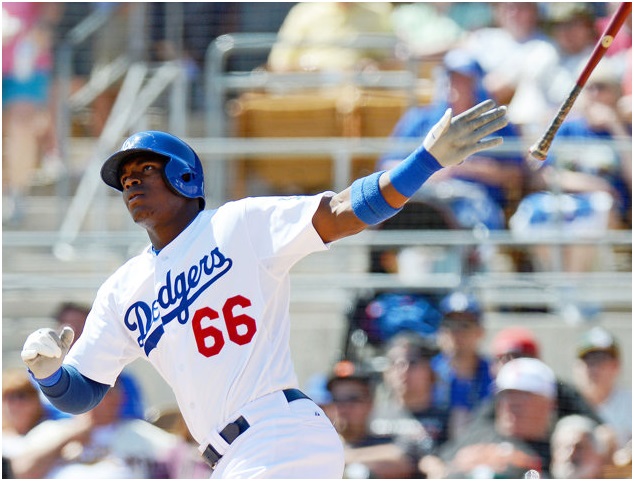 Sports fans around the world, regardless of the sport, love heroes. They especially love new heroes who show up unexpectedly and make such an initial impression that they become overnight sensations.

Such a hero is young Yasiel Puig… recently brought up from the minors by the Los Angeles Dodgers. They first sent Puig to the Arizona League where he made an indelible impression on manager Matt Martin who was at first skeptical that the Dodgers had invested $42 million in a player that no one had actually seen play in a real baseball game.

That’s because Yasiel Puig was playing his baseball down on the island of Cuba… just a few miles south of Key West, Florida… but a whole world away from MLB action. It wasn’t easy for him to get here but once given the chance… Puig made a bigger impression during his first week in Major League Baseball than some players do in a lifetime.

Even veteran sportscasters like Hawk Harrelson are raving about what they have seen from Yasiel Puig so far. “I’ll tell you what, best throw I’ve seen in years from a right fielder.”  Hawk was already bringing up guys like Roberto Clemente, Dwight Evans and Vladimir Guerrero trying to find an adequate comparison to Puig.

It seems that lots of writers and commentators are trying to come up with some sort of an analogy to describe Yasiel Puig.  What legendary players from the past does he remind them of… what other young stars showed so much promise so quickly?

Matt Martin reported back to the Dodgers organization after making his initial observations about Puig that the kid had better raw five-tool talent than Matt Kemp. “On God-given ability going in, it’s like nothing I’ve ever seen.”  Martin even went so far as to compare Yuig to Adrian Peterson.

Piug defected from Cuba in 2012 and signed a seven year, $42 million contract with the Dodgers. He played on the Cienfuegos team of the Cuban National Series and was on the 2008-2009 Cuban National Team. Because of an unsuccessful attempt to defect to the USA in 2011 and was disciplined by not being allowed to play baseball during the 2011-2012 season.

In his first 7 games in Major League Baseball, Yasiel Puig batted an incredible .464 and hit four very impressive home runs. And don’t forget about that throw that everyone is taking about from right field to third base, mustn’t forget that one.