THERE IS ONLY ONE AUGUSTA NATIONAL 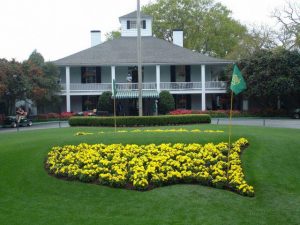 Augusta National Golf Course is one of the most beautiful sports venues on the planet. It’s probably on more peoples bucket list than the Grand Canyon.

Spring is almost here and the PGA tour goes back to the Augusta National for the 2019 Masters in early April. No event in golf brings more prestige to the golfer. No prize is coveted more than that iconic green jacket.

After his solid victory at the World Golf Championship at the Chapultepec Country Club in Mexico City, Dustin Johnson is now the number one favorite to walk away with the Masters title this year. Johnson has been knocking on the door at Augusta for the last three years in a row by finishing in the top ten each year. His best finish so far was tied for fourth place back in 2016.

Las Vegas odds makers have set Dustin Johnson as the favorite at Augusta at 10 to 1 odds, with Tiger Woods, Rory McElroy and Justin Rose close behind him at 12 to 1. The top three young American golfers Justin Thomas, Rickie Fowler and Jordan Spieth follow at 14 to 1 and 16 to 1.

Last year Tiger Woods made it onto the favorites list for the Masters based more on his reputation and past performances than was realistic. Even after shooting a blistering three under par 69 on the final day, Woods still finished at one over par and 16 strokes behind the 2018 winner Patrick Reed.

Rickie Fowler, Jordan Spieth and the Spaniard Jon Rahm finished out the top 4 in the 2018 Masters and all four will be back at it again on April the 11th this year vying for a lions’ share of the huge $11,000,000 prize, the largest payout on this year’s PGA tour.

Weather the winner turns out to be one of the favorites or some long shot coming out on top, he is going to walk away a wealthy man. Top prize this year will reach almost two million dollars to the winner. The runner up still gets over a million bucks and even coming in 14th place still nets the golfer over $200,000! The Masters is rarefied air in more ways than one.

There are lots of folks who would like to see Tiger Woods come back and win the Masters once again. Every time the Tiger hits the links there is a huge crowd cheering him on, sometimes to the point of distraction. Even the boys in Las Vegas are rooting for Mr. Woods. Betting is always brisker when Tiger is in the mix and this year at Augusta is setting up to be a record outing.