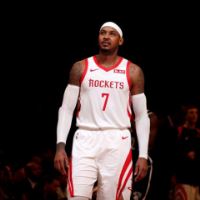 Here’s a look at three players that have had long and outstanding careers and have made valuable contributions to the game, however, they are already washed up and should officially retire from the NBA at the end of the season.

1.- Carmelo Anthony: He’s still without an NBA team after leaving the Houston Rockets in midseason. It doesn’t look like any team is interested in acquiring his services at this point. This is a huge fall from just a few seasons ago when he was a 20-point per game scorer with the New York Knicks.

The main reason for his fall from grace, besides age, is his inability to play good and consistent defense throughout his career. He’s been a poor defender all his life, but now he’s too slow to guard forwards.

Melo has been especially bad this season with a defensive rating of 114, but the truth is he’s been a huge liability on defense over the past few years as well.

Despite his lack of defense, teams held on to him because he still had plenty of offensive ability, but the last two years it seems like father time finally caught up with the 34-year-old forward.

He’s struggled to find his offensive shooting with the Oklahoma City Thunder and the Rockets the last two campaigns as he’s shot below 41 percent from the floor and averaged a career-worst 14.8 points per game.

Despite being one of the great scorers in NBA history he should realize the game has passed him by and retire.

2.- Dwight Howard: Although he’s only 33 and may have some gas left in the tank, he’s been dealing with recurring lower back injuries and he’ll likely become more injury prone as he ages.

It’s becoming increasingly clear that his body is having a very hard time putting up with the required wear and teat that NBA players must endure. He’s already had a very long career and retiring would be a smart move.

If he decided to stick around for a year or two more it’s evident that his days as a starting center are over as he’s become a shell of his former self. This year his back injuries allowed him to play in just nine games, while averaging about 25 minutes per game, a career worst.

Howard signed a two-year, $11 million free-agent deal with the Washington Wizards during the summer of 2018, but the eight-time All-Star hasn’t played since November when he underwent surgery in Los Angeles to treat a gluteal injury.

3.- Zach Randolph: He’s also without a team and hasn’t played since the end of last season. The 37-year-old Randolph never played for the Kings in his second season with them. The team decided instead to ship him, as part of the in the Harrison Barnes trade, to the Dallas Mavericks, who two days later proceeded to waive him.

The Kings wanted to go younger and develop their players, while the Mavs released him to create salary cap space.

Although Randolph himself may refuse to accept it, it seems that teams have realized that the time has come for him to retire after 17 seasons.

He’s not only lost athleticism and speed as he’s aged, which turned him into a defensive liability, but his mid-range and post-up style of play is not that useful in today’s NBA.